Find the best deals for Plymouth Fairfield Inn By Marriott

About Fairfield Inn By Marriott Plymouth

Owned by Marriott Group of Companies, Fairfield Inn started as a quaint hotel located in the Blue Ridge Mountains of Virginia. Owned and developed by John Willard and Alice Marriott, the first Fairfield Inn hotel used to be Fairfield Farm and offered a stunning eye-candy in the region. Inspired by this beauty, Marriott created and built its first ever Fairfield by Marriott Hotel in 1987 in Atlanta, Georgia.

Originally intended to provide accommodation services for the economy market or below $45 a night and to compete with other leading hotel brands such as Hampton Inn, Red Roof Inn and Days Inn, Marriott launches Fairfield Inn. The brand success triggered a global expansion in 2003 with the brand targeting guests and clients from around the world. By 2017, during the 30th year anniversary of the brand, Marriott opened 900 hotels and expansions in their earlier branches in Asia and South America.

In 2019, Fairfield Inn reached another milestone and opened its 1000th hotel - Fairfield Inn & Suites by Marriott Denver Tech Center North. To commemorate the milestone, guests in the newly opened hotel gets the chance to win a 5-day stay in any Fairfield Inn hotel in the world, with free brownies at check-in, just like how Alice Marriott greeted hotel guests back in the day. 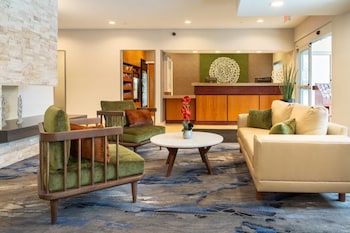 With Freebies Including High-Speed Internet, Free Breakfasts And Parking, The Non-Smoking Fairfield Inn & Suites Minneapolis/Eden Prairie Is A Local Favorite Of Our Guests. This Low-Rise Hotel Has 93 Non-Smoking Rooms With Triple-Sheeted Mattresses And Fluffy Pillows. You Can Crank Up The Tunage With Mp3 Connectivity. Google Up A Game Plan Or Tweet With Friends Using Free High-Speed Internet Access. Busy Professionals Hunker Down At Spacious Work Desks To Take Care Of Last-Minute Business. Rooms Also Feature Coffeemakers, Sofa Beds And Cable Tvs. Dig Into Savory Breakfast Sandwiches, Yummy Muffins And More At The Free Breakfast Buffet Before Heading To The Fitness Room Or Business Center. Hop Into The Indoor Pool Or Have A Soak In The Soothing Hot Tub. Parking Is Free. Fairfield Inn Is A Half-Mile From I-494 And A 16-Minute Drive From The Minneapolis-St. Paul Area. You Can Exercise Your Credit Cards At The Mall Of America, A 13-Minute Drive. Thrill Seekers Ratchet It Up A Notch At Valleyfair Amusement Park, A 12-Minute Drive. Drive Down The Fairway At Braemar Golf Course, Two Miles Away. The Hotel Is 13 Miles From Minneapolis-St. Paul International Airport. 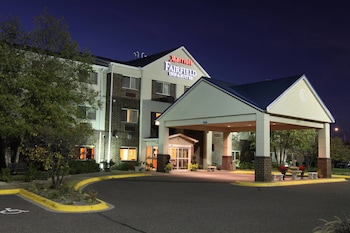 With A Complimentary Breakfast, Free Wi-Fi And An Indoor Pool, The Non-Smoking Fairfield Inn & Suites Marriott Minneapolis St. Paul/Roseville Is A Popular Choice For Our Guests Staying In The Area. This Three-Story Hotel Has 79 Rooms, All Of Which Are Designated Non-Smoking And Include Work Desks, Coffeemakers, Hairdryers, Free Wi-Fi And Cable Tvs. Some Rooms Have Separate Living And Sleeping Areas. A Complimentary Breakfast Is Served Each Morning. Guests Can Swim In The Indoor Pool And Work Out In The On-Site Gym. Parking Is Free. Fairfield Inn & Suites Marriott Minneapolis St. Paul/Roseville Is Off Of I-35W, A 10-Minute Drive From The University Of Minnesota Campus. There Are Several Restaurants Within Two Miles Of The Hotel, And Rosedale Shopping Center Is Two Miles Away. The Como Park Zoo & Conservatory And The Minnesota State Fairgrounds Are 10 Minutes From The Hotel. It'S 15 Minutes To Either Downtown Minneapolis Or Downtown St. Paul, And Minneapolis-St. Paul International Airport Is 15 Miles From The Hotel. 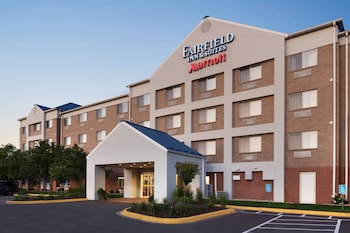 Free Breakfast Sandwiches And Airport Transportation Add To The Pool, Hot Tubs And Quick Airport And Highway Access For A Blooming Deal At The Non-Smoking Fairfield Inn Bloomington. The Three-Story Fairfield Inn Houses 105 Rooms With Lcd Tvs With Premium Channels And Pay Movies, Microwaves, Coffeemakers And Mini-Fridges. The Free Breakfast Buffet Includes Jimmy Dean Sandwiches, And Local Restaurants Offer Delivery Service. Guests Can Grab A Complimentary Coffee And Newspaper In The Lobby, Print Out Boarding Passes, Take A Dip In The Year-Round Indoor Pool And Hot Tubs And Work Out In The Gym. There Are Also Laundry Facilities And A Business Center On-Site. Parking And Airport Shuttle Service Are Both Complimentary, And Park-And-Fly Packages Are Also Available. Nestled In Northeast Bloomington, Right Off Of I-494, The Fairfield Inn Is Less Than 20 Minutes South Of Downtown Minneapolis And The University Of Minnesota, And Less Than Three Miles From Minneapolis-St. Paul International Airport. Within A 10-Minute Walk, Guests Can Reach The Mall Of America And The Sea Life Minnesota Aquarium. And A 10-Minute Drive Across Fort Snelling State Park Lands Them At Lost Spur Golf And Event Center. 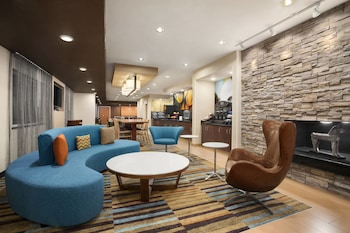 A Convenient Location, Indoor Pool, Hot Tub, Complimentary Wi-Fi, Breakfast, Parking And Shuttles To Both The Airport And Mall Of America Welcome Our Guests To The Non-Smoking, Highly Rated Fairfield Inn & Suites Minneapolis-St. Paul Airport. This Four-Story Property Has 119 Rooms. All Accommodations Feature Cable Tvs, Seating Areas, Alarm Clocks, Spacious Desks, Free Wi-Fi, Local Calls And Newspapers. In The Morning, Guests Rise And Dine On A Complimentary Breakfast That Includes Breakfast Sandwiches, Waffles, Fruit And Assorted Beverages. The Hotel Has An Indoor Pool, Hot Tub, Laundry Facility, 24-Hour Front Desk, Barbecue/Picnic Area, Business And Fitness Centers For Further Convenience. Parking And 24-Hour Shuttles To Both The Airport And The Mall Of America Are On The House. Fairfield Inn & Suites Is Located Off Of I-494, Eight Miles From Downtown St. Paul, With A Number Of Restaurants Within A Five-Minute Drive. It Is One Mile From Lost Spur Country Club. There Is A Nearby Bus Stop To Catch A Ride To Minneapolis Institute Of Arts. Guests Can Also Take The Eight-Mile Trip To The Science Museum Of Minnesota. The Hotel Is Five Miles To Minneapolis-St. Paul International Airport. 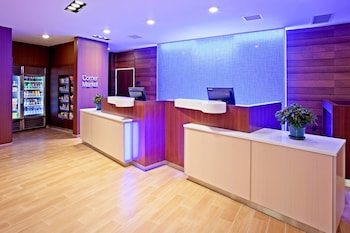 Complimentary Breakfast And Wi-Fi Combine With A Pool And I-35E Location At The Non-Smoking Fairfield Inn & Suites By Marriott St. Paul Northeast. At The Four-Story Fairfield Inn, All 88 Rooms Come With Free Wi-Fi, 39-Inch Flat-Panel Lcd Tvs, Ipod Docks, Microwaves, Mini-Fridges And Coffeemakers. A Complimentary Breakfast Buffet Is Served Each Morning. Guests Relax Any Time Of Year In The Indoor Pool And Hot Tub. The Hotel Offers 24-Hour Front Desk Service. Parking Is Free. Off I-35E, The Fairfield Inn Is In Northeast St. Paul In The Town Of Vadnais Heights. Minneapolis Is 20 Minutes By Car. A 15-Minute Drive Southwest Leads To Popular City Sites Including The Science Museum Of Minnesota, Roy Wilkins Auditorium And The Mississippi River. Minneapolis - St. Paul International Airport Is Within 20 Miles Of The Hotel. At The Fairfield Inn & Suites By Marriott St. Paul Northeast, Priceline Guests Are Within Minutes Of Minneapolis And St. Paul And Appreciate The Huge Rooms And Very Nice Breakfast.

A Heated Indoor Pool, Free Breakfast And Triple-Sheeted Bedding Entice Guests At The Non-Smoking Fairfield Inn Minneapolis Burnsville. This Three-Story Hotel Offers 53 Rooms With Flat-Panel Tvs, Coffeemakers And Triple-Sheeted Bedding Over Pillowtop Mattresses. Spend Some Quality Family Time At The Heated Indoor Pool After Enjoying A Free Breakfast Buffet. A Business Center And Fitness Room Are Available, And Parking Is Free. Near The Intersection Of I-35E And I-35W, This Hotel Is Within Walking Distance Of Several Restaurants And Shopping. Watch Your Kids Squeal With Delight At The Minnesota Zoo, Seven Miles Away, Or At The Valleyfair Amusement Park, About A 20-Minute Drive. Fairview Ridges Hospital Is About A Mile Away. Dive Into Shopping At Mall Of America, 10 Miles Away, Or Explore The Twin Cities, Both About Half-An-Hour Away. Minneapolis-St. Paul International Airport Is 15 Miles North.

With Freebies Including High-Speed Internet, Free Breakfasts And Parking, The Non-Smoking Fairfield Inn & Suites Minneapolis/Eden Prairie Is A Local Favorite Of Our Guests. This Low-Rise Hotel Has 93 ...

With A Complimentary Breakfast, Free Wi-Fi And An Indoor Pool, The Non-Smoking Fairfield Inn & Suites Marriott Minneapolis St. Paul/Roseville Is A Popular Choice For Our Guests Staying In The Area. Th...

Free Breakfast Sandwiches And Airport Transportation Add To The Pool, Hot Tubs And Quick Airport And Highway Access For A Blooming Deal At The Non-Smoking Fairfield Inn Bloomington. The Three-Story Fa...

A Convenient Location, Indoor Pool, Hot Tub, Complimentary Wi-Fi, Breakfast, Parking And Shuttles To Both The Airport And Mall Of America Welcome Our Guests To The Non-Smoking, Highly Rated Fairfield ...

Complimentary Breakfast And Wi-Fi Combine With A Pool And I-35E Location At The Non-Smoking Fairfield Inn & Suites By Marriott St. Paul Northeast. At The Four-Story Fairfield Inn, All 88 Rooms Come Wi...

Traveling to Plymouth, Minnesota? Here is your 6-day weather forecast in the area. Whether it is a warm weather destinations or cold climate don’t forget to consider weather, while you pack your bags for this trip. Start your day when the sunrises at 1:31 PM and don’t miss the sunset at 10:33 PM. Today’s winds are traveling south-southwest at a speed of 11 MPH. The temperature feels like 31 with a humidity level of 89. Cloud coverage is 67 percent with 13 percent visibility. Today’s UV index is 1 make sure to prepare properly. Make sure to plan your travel itinerary to match your travel weather forecast to make the most of your vacation with Reservations.com.