Originally named CrestHill by Hilton, Hilton Garden Inn started in the 1980s. However, due to the downtime in the real estate industry, only four out of the initial 25 proposed hotels materialized. Three out of these four hotels exists up to the present day and is still part of the Hilton Garden Inn chain of hotels.

Plush Beds, Free Wi-Fi, An Indoor Pool And A Convenient Location Are The Draws For Our Guests At The Hilton Garden Inn Minneapolis St. Paul-Shoreview. The Four-Floor Hilton Garden Inn Has 100 Rooms Featuring Coffeemakers, Microwaves, Mini-Fridges, Free Wi-Fi And Flat-Panel Tvs With Cable And Hbo. Non-Smoking Rooms Are Available. It Gets Cold Up Minnesota Way, So It'S Good News That The Pool And Hot Tub Are Indoors. The Hotel Also Has A Fitness Room, A 24-Hour Convenience Store, A 24-Hour Business Center, A Lobby Fireplace, Laundry Facilities, Free Parking, A Bar Lounge And A Restaurant That Serves Breakfast And Dinner. The Hilton Garden Inn Is In Shoreview Off Us 10/I-694, Three Miles East Of I-35W. Tropics Indoor Waterpark Is Two Miles Away, And Rosedale Center Mall Is A Four-Mile Trip. Minneapolis And St. Paul Are Both Just 10 Miles From The Hotel. Minneapolis-St. Paul International Airport And The Mall Of America Are About 15 Miles North. 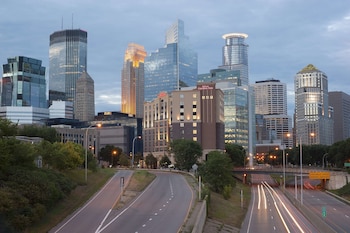 Complimentary Wi-Fi, Shuttle Service And Movie Channels, An Indoor Pool, A 24-Hour Convenience Store And A Central Location Are Among The Amenities In Bloom For Our Guests Staying At Hilton Garden Inn Minneapolis Downtown. This 10-Story Property Has 210 Rooms With Garden Sleep System Adjustable Beds. Furnishings Include Work Desks With Ergonomic Chairs And Oversized Chairs And Ottomans In Separate Living Areas. All Accommodations Are Also Equipped With Microwaves, Refrigerators, Coffeemakers, Flat-Panel Hdtvs With Free Movie Channels And Am/Fm Clock Radios With Mp3 Connections. Complimentary Wi-Fi Is Available Throughout The Hotel. There Are A 24-Hour Business Center, A Restaurant, A Lounge, An Indoor Pool, A Fitness Center, Evening Room Service, A 24-Hour Convenience Store, An Atm And A Guest Laundromat On-Site. Valet Parking Is Available For An Additional Fee. A Complimentary Weekday Shuttle Takes Guests To Offices In The Downtown Business And Financial District And To The Light Rail Station. Located Drectly Off I-35 And I-94, Hilton Garden Inn Is One Block From Minneapolis Convention Center And Within One Mile Of Nicollet Mall, Target Center, Hhh Metrodome And Minneapolis Institute Of Arts. Guthrie Theater And University Of Minnesota Walker Art Center/Minneapolis Sculpture Garden Are Two Miles Away. It'S 12 Miles To Both The Mall Of America And Minneapolis-St. Paul International Airport.

Rolling Out The Welcome Mat With Free Wi-Fi And Complimentary Area Shuttle Service, Hilton Garden Inn St. Paul/Oakdale Also Serves Up Fresh, Contemporary Style And A Fine Choice Of Amenities. The 116 Rooms At This Four-Floor Hilton Garden Inn All Feature Cherry-Finish Furniture, Ultra-White Duvets And High Thread-Count Sheets. Free Wi-Fi, Lcd Flat-Panel Cable Tvs With Hbo, Microwaves And Mini-Fridges Are Also In-Room Standards. Non-Smoking Rooms Are Available. The Hotel'S Indoor Heated Pool, Hot Tub And 24-Hour Fitness Room Invite Guests To Relax And Work Out When They Choose. The Hotel Boasts A Signature Grill Open For Breakfast And Dinner, Along With A 24-Hour Pantry For Impulsive Snacking. Take Advantage Of The Well-Equipped Business Center And Free Shuttle To Local Attractions Within A Five-Mile Radius Of The Hotel. Parking Is Free. In The Corporate-Centric Outskirts Of St. Paul, The Hilton Garden Inn Is Within A Half-Mile Of I-94. Corporate Headquarters For Hartford Life, Eastman Kodak And 3M Are Within Three Miles Of The Hotel. Across The Street, There Is A Major Retail Center Where The Selection Of Restaurants Meets All Kinds Of Tastes And Budgets. Minneapolis-St. Paul International Airport Is 17 Miles Away.

Free Parking And Internet Access Are Big Hits With Our Guests At The Non-Smoking Hilton Garden Inn Minneapolis Airport-Mall Area. The Six-Story Hilton Garden Inn Minneapolis Airport-Mall Area Has 200 Non-Smoking Rooms With Free High-Speed Internet Access, Flat-Panel Tvs And Snack-Friendly Features Like Mini-Fridges, Microwaves And Coffeemakers. Get A Hearty Workout In The Fitness Room Or Get Down To Work In The Business Center. Reward Yourself After With A Swim In The Indoor Pool. Parking Is Free. The Hilton Garden Inn Sits Off Of I-494, Within Walking Distance Of Ikea And Mall Of America. There Are A Few Restaurants Within A 10-Minute Walk, And There Is Public Transportation At The Hotel'S Corner. Take The Shuttle To The Light Rail For A Quick Way To Travel The 13 Miles To Downtown Minneapolis, Or Spend The Day At Mall Of America, With Nickelodeon Universe, Sea Life Minnesota Aquarium And Plenty Of Shopping. It'S Two Miles To Minneapolis-St. Paul International Airport.

The Plump Pillows, Flat-Panel Tvs, Free Shuttle Service And Free Internet Are Some Of The Winner Amenities Offered At The Hilton Garden Inn Bloomington. Guests Rest Worry-Free At The Six-Story Hilton Garden Inn. All 168 Rooms Feature The Contemporary Comforts Of Premium Signature Bedding, Complimentary High-Speed Internet, Microwaves, Mini-Fridges, Coffeemakers, Mp3 Docks And Flat-Panel Hdtvs With Premium Channels. Marble Bathrooms Come With Designer Toiletries. Guests Can Work Out In The Fitness Center And Relax Year-Round In The Indoor Pool And Hot Tub. The Hotel Also Provides A 24-Hour Mini-Mart, Express Check-In/Check-Out And Coin-Operated Laundry Facilities. On-Site Parking And Shuttle Service To The Airport And The Mall Of America Are Free. Nestled Next To I-494, The Hilton Garden Inn Places Guests In West Bloomington, Less Than One Mile From The Trails Along Mount Normandale Lake Park And Within A 10-Minute Drive Of The Mall Of America And Braemar Golf Course. The Hotel Is Also Within 20 Minutes Of The Heart Of Minneapolis And Less Than 10 Miles From Minneapolis-St. Paul International Airport.

With In-Room Microwaves And Refrigerators, An Indoor Pool And An On-Site Restaurant, The Non-Smoking Hilton Garden Inn Minneapolis/Maple Grove Is A Smart Choice For Our Guests. This Three-Story Hotel Has 120 Rooms, All Non-Smoking. Each Room Includes An Armchair And Ottoman, A Radio With Mp3 Connection, Cable Tv With Premium Channels, A Work Desk, A Microwave And A Mini-Fridge. Internet Access Is Free. Guests Can Go For A Swim In The Indoor Pool And Work Out In The Fitness Center. An On-Site Restaurant Serves Breakfast And Dinner. The Hotel Offers A Free Local Shuttle Service Within A Seven-Mile Radius. Parking Is Free. The Hilton Garden Inn Is Off Of I-494, Three Miles From The Shoppes At Arbor Lakes. Fish Lake Regional Park And Cedar Island Shores Park Are Both One Mile From The Hotel. Downtown Minneapolis And The University Of Minnesota Are A 25-Minute Drive. The Mall Of America Is 35 Minutes Away, And Minneapolis-St. Paul International Airport Is 28 Miles From The Hotel.

Free High-Speed Internet Access And Parking, As Well As Comfy Accommodations, Can Be Enjoyed By Our Guests Headed To The Non-Smoking Hilton Garden Inn Minneapolis Eagan. Guests Find Their Own Comfort Level On Self-Adjusting Mattresses At This Four-Story Hotel With 100 Rooms. They Flip On The 32-Inch, Flat-Panel Lcd Tvs For In-Room Movies, Or Flip Open Their Laptops For Free High-Speed Internet Access. Worker Bees Hunker Down At Spacious Work Desks And Save Their Backs In Ergonomic Chairs. All Accommodations Include Microwaves, Refrigerators, Coffeemakers, Alarm Clock Radios With Mp3 Connectivity And Blackout Curtains. Hungry Guests Saunter Down To The On-Site Restaurant For Yummy Scrambled Eggs For Breakfast Or Enticing Entrees For Dinner. Office Devotees Knock Out Some Last-Minute Paperwork With Copy And Printing Services In The Business Center, While Fitness Enthusiasts Workout Anytime In The 24-Hour Fitness Center. The Hotel Also Has An Inviting Indoor Pool, Soothing Hot Tub And 24-Hour Convenience Store. Airport Shuttle Service And Parking Are Complimentary. Hilton Garden Inn Is Situated A Half-Mile From I-35 East And A 20-Minute Drive From The Twin Cities Of Minneapolis And St. Paul. Minnesota Zoo Is Four Miles From The Hotel, And Cascade Bay Water Park Is Five Miles. Buck Hill Is 12 Minutes Away. The Hotel Is 10 Miles From Minnesota - St. Paul International Airport.

Free Wi-Fi, Free Parking And An Indoor Pool Make The Non-Smoking Hilton Garden Inn Minneapolis/Eden Prairie A Top Choice Of Our Guests. This Low-Rise Hotel Has 97 Rooms With Flat-Panel Tvs And Granite Countertops/Vanities. You Can Find Your Comfort Level With A Self-Adjusting Mattress. Hammer Out Some Work At A Roomy Desk In An Ergonomic Chair. You Can Play Your Own Travel Soundtrack On The Alarm Clock Radio With Mp3 Connectivity. Surf The Web Or Google Up A Game Plan With Free Wi-Fi. Rooms Include Coffeemakers, Blackout Curtains, Microwaves And Refrigerators. Hungry Guests Wake Up To The Smell Of Savory Sausage And Fluffy Scrambled Eggs At The On-Site Grill (Also Serving Dinner). You Can Squeeze In A Workout In The Fully Equipped Fitness Center Or Take Care Of Last-Minute Paperwork In The 24-Hour Business Center. Splash In The Refreshing Indoor Pool Or Soak In The Soothing Hot Tub. You Can Hitch A Ride Within A Five-Mile Radius On The Free Shuttle. Parking Is Free. Hilton Garden Inn Minneapolis/Eden Prairie Is Less Than Two Miles From I-494 And A 20-Minute Drive From The Minneapolis-St. Paul Area. You Can Catch America'S Pastime At Target Field, The Home Of The Minnesota Twins Baseball Team, A 17-Minute Drive. If Football'S Your Game, Head Over To The Metrodome, A 22-Minute Drive, And Watch The Minnesota Vikings Play. Shop Till You Drop At The Mall Of America, A 16-Minute Drive. The Hotel Is 15 Miles From Minneapolis-St. Paul International Airport.

Complimentary Wi-Fi, Shuttle Service And Movie Channels, An Indoor Pool, A 24-Hour Convenience Store And A Central Location Are Among The Amenities In Bloom For Our Guests Staying At Hilton Garden Inn...

The Plump Pillows, Flat-Panel Tvs, Free Shuttle Service And Free Internet Are Some Of The Winner Amenities Offered At The Hilton Garden Inn Bloomington. Guests Rest Worry-Free At The Six-Story Hilton ...

With In-Room Microwaves And Refrigerators, An Indoor Pool And An On-Site Restaurant, The Non-Smoking Hilton Garden Inn Minneapolis/Maple Grove Is A Smart Choice For Our Guests. This Three-Story Hotel ...

Free High-Speed Internet Access And Parking, As Well As Comfy Accommodations, Can Be Enjoyed By Our Guests Headed To The Non-Smoking Hilton Garden Inn Minneapolis Eagan. Guests Find Their Own Comfort ...

Free Wi-Fi, Free Parking And An Indoor Pool Make The Non-Smoking Hilton Garden Inn Minneapolis/Eden Prairie A Top Choice Of Our Guests. This Low-Rise Hotel Has 97 Rooms With Flat-Panel Tvs And Granite...

Traveling to Little Canada, Minnesota? Here is your 6-day weather forecast in the area. Whether it is a warm weather destinations or cold climate don’t forget to consider weather, while you pack your bags for this trip. Start your day when the sunrises at 1:33 PM and don’t miss the sunset at 10:31 PM. Today’s winds are traveling west-southwest at a speed of 7 MPH. The temperature feels like 22 with a humidity level of 70. Cloud coverage is 74 percent with 15 percent visibility. Today’s UV index is 1 make sure to prepare properly. Make sure to plan your travel itinerary to match your travel weather forecast to make the most of your vacation with Reservations.com.