Find the best deals for Stayner Super 8 Motel By Wyndham

About Super 8 Motel By Wyndham Stayner Free Morning Waffles, A Heated Pool And A Complimentary Casino Shuttle Give The Non-Smoking Super 8 By Wyndham Barrie An Edge. All 82 Rooms At This Four-Story Non-Smoking Property Boast Free High-Speed Internet, Microwaves, Refrigerators, Flat-Panel Cable Tvs, Coffeemakers And Complimentary Local Calls; Select Rooms Include Two-Person Jetted Tubs Or Video Games. Wake Up To The Smell Of Freshly Baked Waffles At The Complimentary Breakfast Each Morning. Hit The Gym For A Workout Or Make A Splash In The Heated Indoor Pool And Hot Tub. Park Your Wheels On Site For Free And Board The Complimentary Shuttle To Georgian Downs Racetrack And Casino. Pets Are Welcome On Select Floors. Located Off Highway 400 At The Corner Of Mapleview Drive, The Super 8 By Wyndham Is One Mile From Barrie Molson Center. Drive 15 Minutes North To Tee Off At The Barrie Country Club Or Hit The Slopes At Snow Valley, 25 Minutes Northwest. The Go Transit Station And Lake Simcoe Are Just Over Three Miles North And Splash Canyon Water Park Is 20 Minutes North. Toronto Pearson International Airport Is 50 Miles South. 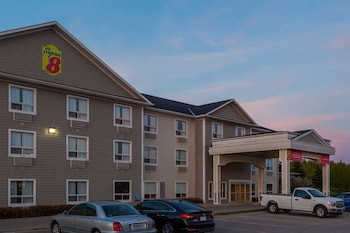 Rest Easy In A Well-Equipped Room And Waken To Free Breakfast And A Dip In The Indoor Pool At The Non-Smoking Super 8 By Wyndham Midland, Which Also Has A Hot Tub And Fitness Room. The Non-Smoking, Three-Story Super 8 By Wyndham Has 65 Rooms With Satellite Tv, Microwaves, Refrigerators And Coffeemakers. Wi-Fi Is Available. Start Your Day With A Workout On The Cardio Machines In The Fitness Room Or With A Dip In The Heated Indoor Pool, And Then Relax In The Hot Tub. On Your Way Out For The Day, Stop By The 24-Hour Lobby For Free Continental Breakfast. Pets Are Allowed For A Fee, Parking Is Free And A Guest Laundry Adds Convenience. The Hotel Is Located Off Highway 93 About A Mile From Central Midland, Which Has A Harbor On Georgian Bay Off Lake Huron. Tour Great Lakes Winery, Two Miles Away. The Stores At Mountainview Mall Are Three-Quarters Of A Mile Away. Explore Midland'S History At The Huronia Museum Or Take A Stroll At Little Lake, Both About A Mile Away. Toronto Pearson International Airport Is About 90 Miles Away.

Free Morning Waffles, A Heated Pool And A Complimentary Casino Shuttle Give The Non-Smoking Super 8 By Wyndham Barrie An Edge. All 82 Rooms At This Four-Story Non-Smoking Property Boast Free High-Spee...

Rest Easy In A Well-Equipped Room And Waken To Free Breakfast And A Dip In The Indoor Pool At The Non-Smoking Super 8 By Wyndham Midland, Which Also Has A Hot Tub And Fitness Room. The Non-Smoking, Th...

Traveling to Stayner, Ontario, Canada? Here is your 6-day weather forecast in the area. Whether it is a warm weather destinations or cold climate don’t forget to consider weather, while you pack your bags for this trip. Start your day when the sunrises at 12:43 PM and don’t miss the sunset at 10:23 PM. Today’s winds are traveling south-southwest at a speed of 16 MPH. The temperature feels like 1 with a humidity level of 68. Cloud coverage is 95 percent with 14.6 percent visibility. Today’s UV index is 1 make sure to prepare properly. Make sure to plan your travel itinerary to match your travel weather forecast to make the most of your vacation with Reservations.com.