Originally named CrestHill by Hilton, Hilton Garden Inn started in the 1980s. However, due to the downtime in the real estate industry, only four out of the initial 25 proposed hotels materialized. Three out of these four hotels exists up to the present day and is still part of the Hilton Garden Inn chain of hotels.

Guests Connect With Free Wi-Fi, Unwind By The Rooftop Pool And Hot Tub, And Dine At The On-Site Restaurant At The Non-Smoking Hilton Garden Inn San Diego Downtown. A Modern, Mid-Rise Exterior Greets Guests At The Non-Smoking Hilton Garden Inn. The 204 Sleek Rooms Are Done In Earth Tones And Feature Free Wi-Fi, 42-Inch Flat-Panel Tvs, Mini-Fridges, Coffeemakers And Microwaves. The Courtyard Area Beckons Guests With Contemporary Seating Areas, A Fire Feature And An Outdoor Ping Pong Table. The Bar And On-Site Restaurant Are Prime Places To Relax And Grab Casual Bites. After Working Hard In The Business Center Or Fitness Room, Don'T Miss The Rooftop Pool With Plenty Of Lounge Chairs And City Views. Other Property Pluses Include A Small Market, Self-Service Laundry Facilities And Valet Parking. The Hilton Garden Inn Is Less Than A Half-Mile From I-5 And A Mile-And-A-Half From Downtown San Diego. The Hotel Sits A Block From Waterfront Park And Is Within A Few Blocks Of Little Italy'S Plentiful Eats. Guests Can Walk To The Uss Midway Museum Or The Maritime Museum Of San Diego Within 20 Minutes, And Gorgeous Views Await At La Jolla Cove, A 20-Minute Drive. Family-Friendly Options Include The San Diego Zoo, Three Miles Away, And Seaworld San Diego, 15 Minutes From The Hotel. Qualcomm Stadium And Petco Park Are Each Less Than 20 Minutes By Car. The Closest Light Rail Stop Is Within A 10-Minute Walk, And San Diego International Airport Is Two Miles From The Hotel. Priceline Guests Give The Hilton Garden Inn Thumbs Up, Citing The Friendly And Attentive Staff, Comfortable Beds And Convenient Location Close To The Waterfront And Interstate. 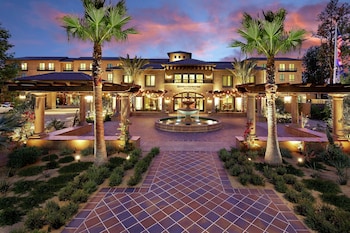 The Outdoor Pool, Free Wi-Fi And Easy Access To I-8 And The Trolley Make The Non-Smoking Hilton Garden Inn San Diego Old Town/Sea World Area A Winning Choice. This Four-Story Hilton Furnishes 179 Rooms With Free Wi-Fi, Flat-Panel Hdtvs, Mp3 Docks, Microwaves, Mini-Fridges And Coffeemakers. Guests Find A 24-Hour Market Available Plus Evening Room Service And An In-House Restaurant. Cool Down From The California Sun In The Heated Outdoor Pool, Open Year-Round. After A Workout In The Fitness Room. Guests Can Soothe Achy Muscles In The Hot Tub. The Hotel Also Provides A 24-Hour Business Center. Off I-5 And I-8, The Hilton Offers A Sweet San Diego Setting Within A Five-Minute Walk Of The Old Town Transit Center. Hop On The Trolley For A Half-Hour Journey South To The Gaslamp Quarter, Seaport Village And The San Diego Convention Center. It'S Also A 20-Minute Ride To Little Italy. Kids, Young And Old, Appreciate Being Only Four Miles From Seaworld. From San Diego International Airport, Head Five Miles North To Reach The Hotel.

Free Wi-Fi, A Pool And Easy I-8 Access Is The Way To Go At The Non-Smoking Hilton Garden Inn San Diego Mission Valley/Stadium. Flat-Panel Tvs, Free Wi-Fi, Coffeemakers And Desks Are Featured Within All 175 Rooms At The Four-Story Hilton Garden Inn; Microwaves And Mini-Fridges Can Be Requested. Make A Splash Year-Round In The Heated Outdoor Pool, Chill Out In The Hot Tub Or Get Physical In The Fitness Room. You Also Have 'Round-The-Clock Access To The Business Center. The Restaurant And Bar Are Open For Breakfast And Dinner, And A Small, 24-Hour Market Is Also On-Site. The Hotel Provides Laundry Facilities, And Parking Is Available For An Extra Charge. The Hotel Lands Guests Off I-8 And I-805, Less Than 10 Miles North Of Downtown San Diego And The San Diego Zoo. Academics Make Their Way To The University Of San Diego, Seven Miles Away, While Family Fun Abounds Within A 20-Minute Drive At Seaworld. Guests Are Also Within A Mile Of Balboa Park And Six Miles Southeast Of Old Town. San Diego International Airport Lies Within Four Miles Of The Hotel.

Beyond The Conveniences Of Free Internet And Free Area Shuttle, Hilton Garden Inn San Diego Del Mar Is A Place Where Guests Can Find Serenity (That'S The Name Of The Spa.) An 80-Room, Four-Floor Accommodation, This Recently-Opened Hotel Is Particularly Proud Of Its Full-Service Serenity Spa With Six Different Treatment Rooms For Massages, Body Treatments And Facials, As Well As A Hair Salon. The Tastefully Designed, Neutral-Toned Non-Smoking Rooms Include Free Wired High-Speed Internet, Premium Bedding, Cable Tv With Dvd Players, Refrigerators And Microwaves; Hypo-Allergenic Room Are Available Upon Request. Additional Amenities Include A Free Area Shuttle To Destinations Within Five Miles, Two On-Site Restaurants Focused On Fresh Selections And Locally Grown Goodness, An Inviting Bar/Lounge, Fitness Facility, Outdoor Pool-Hot Tub, 24-Hour Business Center And A Relaxing Lobby Where You Can Access Free Wi-Fi By The Cozy Fireplace. Parking Is Free. Just East Of San Diego'S Torrey Hills Area, The Hotel Is Tucked In A Peaceful, Scenic Neck Of The Woods, With Easy I-5 Access. The Neighborhood Itself Is Relaxing Yet Well-Populated, With Sidewalks Ideal For Your Morning Jog Or Evening Stroll. From Here, You'Re A 10-Minute Ride To The Beautiful Terrain Of Torrey Pines State Park-Beach And The Challenging Terrain Of Torrey Pines Golf Course, As Well As Ucsd, Scripps Institution Of Oceanography And Del Mar Race Track. Guests Might Also Report To Mcas-Miramar (A 15-Minute Drive) Or See The Latest Show At Seaworld (A 20-Minute Trip). 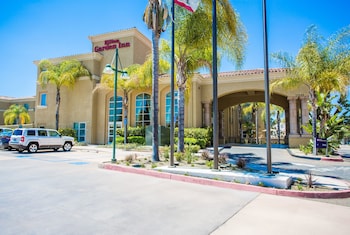 A Beautiful Setting, Free Wi-Fi And Parking That'S On The House Are Reasons Our Guests Give For Choosing The Non-Smoking Hilton Garden Inn San Diego/Rancho Bernardo. This Lodging Sits In The Hills Above San Diego, Near Pristine Golf Courses And Wineries. The Hilton Garden Inn Boasts 200 Rooms On Three Floors, Each Offering Mattresses That Contour To Your Body, Comfortable Sitting Areas And Tvs With Premium Channels. The Spacious Work Desk With Task Lighting, An Ergonomic Chair, Free Wi-Fi And Remote Printing Access Create A Traveling Office For Corporate Executives On The Go. The In-Room Hospitality Center Includes A Mini-Fridge, A Microwave And A Coffeemaker. In Addition To The Fitness Facility, The Inn Provides A Stay Fit Kit For In-Room Exercise. There'S An On-Site Restaurant, A Full-Service Bar And An Outdoor Pool And Hot Tub. The Hilton Garden Inn Is Located 24 Miles From San Diego And 26 Miles From The Airport. Corporate Travelers Are Less Than Three Miles From Sony, Northrop Grumman, Hp And Other Corporations. There Are Several Wineries In The Surrounding Area And The Top-Ranked San Diego County Golf Course Is Just Two Miles From The Hotel.

Free Wi-Fi, A Pool And Easy I-8 Access Is The Way To Go At The Non-Smoking Hilton Garden Inn San Diego Mission Valley/Stadium. Flat-Panel Tvs, Free Wi-Fi, Coffeemakers And Desks Are Featured Within Al...

Beyond The Conveniences Of Free Internet And Free Area Shuttle, Hilton Garden Inn San Diego Del Mar Is A Place Where Guests Can Find Serenity (That'S The Name Of The Spa.) An 80-Room, Four-Floor Accom...

A Beautiful Setting, Free Wi-Fi And Parking That'S On The House Are Reasons Our Guests Give For Choosing The Non-Smoking Hilton Garden Inn San Diego/Rancho Bernardo. This Lodging Sits In The Hills Abo...

Traveling to San Diego, California? Here is your 6-day weather forecast in the area. Whether it is a warm weather destinations or cold climate don’t forget to consider weather, while you pack your bags for this trip. Start your day when the sunrises at 12:43 PM and don’t miss the sunset at 2:51 AM. Today’s winds are traveling north-northwest at a speed of 10 MPH. The temperature feels like 67 with a humidity level of 73. Cloud coverage is 23 percent with 15 percent visibility. Today’s UV index is 10 make sure to prepare properly. Make sure to plan your travel itinerary to match your travel weather forecast to make the most of your vacation with Reservations.com.