Embassy Suites is an upscale, full-service, all-suite hotel chain managed by Hilton Worldwide. It boasts of over 253 locations world-wide targeting both leisure and business travelers. It has another 46 properties in the pipeline. One of the most anticipated addition is the 229-room Embassy Suites in Gulf Shores, which is expected to open in the spring of 2022. The $85 million mixed-used development includes an 11,000 sq. ft. meeting space and a 7,800 sq. ft ballroom.

The hotel chain was a brainchild of the Holiday Corp., under the brand Holiday Inns in 1983. Its first hotel opened in 1984 in Overland Park. Six years after, Embassy Suites was sold to The Promus Companies, Inc., before it joined the Hilton Family in December 1999 with the merger of its new parent company with Hotels Corp. In 2009, it celebrated a milestone with the opening of the Embassy Suites Minneapolis - Brooklyn Center, its 200th hotel.

Embassy Suites is known for its two-room suites with a separate sleeping area and living area. It features an atrium-style layout and long indoor drops. Every guest gets to enjoy a complimentary Evening Reception with snacks and free made-to-order breakfast. Some scenes of the 2017 film Spider-Man: Homecoming was filmed at the Hilton Atlanta Perimeter Center Embassy Suites. 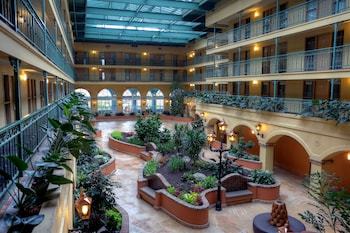 A Mediterranean-Style Facade And Stunning Atrium Lobby Are A Fitting Welcome To The Elegant Embassy Suites Hotel Los Angeles International Airport South. A Local Favorite Of Our Guests, This 349-Unit Property On Four Floors Consists Entirely Of Two-Room Suites With Separate Living And Sleeping Areas. All Suites Have High-Speed Internet Access For A Fee, Two Cable Tvs, Microwaves, Refrigerators And Nice Touches Like A Free Newspaper Delivered To Your Door Each Morning. Non-Smoking Accommodations May Be Requested. The Hotel Provides A Free Cooked-To-Order Breakfast Buffet Every Day And A Free Evening Reception With Light Snacks And Drinks. The Bistro Is Open For Lunch And Dinner Every Day. The Business Center Has Your Back With Copy, Fax And Other Business Services, And The Free Shuttle Will Get You To Your Flight In A Jiffy. When It'S Time To Relax, The Indoor Pool, Hot Tub And Fitness Center Will Help You Stay In Shape And Lose The Stress. Parking Is Available And Small Pets Are Welcome For An Additional Fee. Located Off I-105, The Embassy Suites Is On The Periphery Of Los Angeles International Airport. Several Restaurants Are Within One Mile. Downtown Los Angeles Is 25 Minutes From The Hotel.

Complimentary Shuttle Service, A Free Nightly Happy Hour And A Sunlit Atrium Are A Few Reasons Why The Embassy Suites Hotel Los Angeles International Airport North Is Popular With Our Guests. All 221 Rooms On Eight Floors Include Refrigerators, Microwaves, Mp3 Alarm Clocks And Limestone Vanities In The Bathrooms. Suites Also Include Balconies, Sofa Beds And 42-Inch Flat-Panel Tvs. Wi-Fi Is Available. Stay In Touch At The Business Center And Stay Fit In The Exercise Room. Wind Down The Day At The Nightly Manager'S Reception With Complimentary Drinks And Snacks. Make A Splash At The Heated Indoor Pool And Hot Tub, Dine At The On-Site Restaurant And Hand Your Laundry To The Valet. Use Free Shuttle From The Airport Or Park Your Car For A Fee. Just One-And-A-Half Miles From Los Angeles International Airport, The Embassy Suites Is Also Close To Fun In The Sun. Walk To Local Restaurants And Several Car Rental Companies, Or Drive Six Miles North To Villa Marina Marketplace Or Venice Beach. Playa Del Ray Is Four Miles West. Loyola Marymount University Is Three Miles North. Watch The Sunset On Santa Monica Pier, Nine Miles Northwest Or Stroll Along Rodeo Drive, 20 Minutes North. Downtown Attractions, Including The Theater District, Museum Of Contemporary Art, Staples Center And Chinatown, Are 17 Miles North.

A Complimentary Local Shuttle, Gorgeous Indoor Pool And Well-Stocked Fitness Room: No Wonder The Embassy Suites Hotel Los Angeles-Downey Is One Of The Area'S Most Popular Hotels Among Our Guests. Surrounded By Towering Palm Trees, The Eight-Story Embassy Suites Has An Eye-Popping Facade. The Interior Is Just As Striking, With A Brightly Illuminated Central Atrium Featuring Dramatic Waterfalls And Koi Ponds. The 219 Two-Room Suites Have A Fun, Fresh Feel. Look For Up-To-The-Minute Amenities Like Flat-Panel Tvs And Wi-Fi Connections. The Living Areas Have Comfortable Sofas And Wet Bars With Microwaves, Mini-Fridges And Coffeemakers. The Heated Indoor Pool And Hot Tub Have Sunlight Streaming Through Dramatic Arches, And The Fitness Room Is Filled With Free Weights And Cardio Machines. A Cooked-To-Order Breakfast Is On The House, And An Elegant Restaurant Serves Other Meals. Room Service Is Also Available. Parking Is Free, As Is A Shuttle To Destinations Within Five Miles Of The Hotel. The Hotel Is On Fireside Avenue In Downtown Downey, A Short Drive From I-5, I-105, I-605 And I-710. Shopaholics Appreciate That The Stonewood Center Shopping Mall Is Less Than A Mile Away. The Columbia Memorial Space Center, A Hands-On Learning Center, Is Less Than Three Miles South. Long Beach Airport Is Nine Miles South, And Los Angeles International Airport Is 19 Miles West.

A Mediterranean-Style Facade And Stunning Atrium Lobby Are A Fitting Welcome To The Elegant Embassy Suites Hotel Los Angeles International Airport South. A Local Favorite Of Our Guests, This 349-Unit ...

Complimentary Shuttle Service, A Free Nightly Happy Hour And A Sunlit Atrium Are A Few Reasons Why The Embassy Suites Hotel Los Angeles International Airport North Is Popular With Our Guests. All 221 ...

A Complimentary Local Shuttle, Gorgeous Indoor Pool And Well-Stocked Fitness Room: No Wonder The Embassy Suites Hotel Los Angeles-Downey Is One Of The Area'S Most Popular Hotels Among Our Guests. Surr...

Traveling to Rolling Hills, California? Here is your 6-day weather forecast in the area. Whether it is a warm weather destinations or cold climate don’t forget to consider weather, while you pack your bags for this trip. Start your day when the sunrises at 12:37 PM and don’t miss the sunset at 2:57 AM. Today’s winds are traveling west at a speed of 7 MPH. The temperature feels like 65 with a humidity level of 80. Cloud coverage is 45 percent with 15 percent visibility. Today’s UV index is 1 make sure to prepare properly. Make sure to plan your travel itinerary to match your travel weather forecast to make the most of your vacation with Reservations.com.