Economy hotels are aplenty in the hospitality business, but Red Roof Inn stands out from among the many options with its quality accommodations, and its experience in the industry. Red Roof Inn saw its beginning in 1973 in Columbus, Ohio. It was founded by Jim Trueman, but after his demise, his family was unable to run the company and soon saw the hotel purchased by a real estate fund company, the Morgan Stanley.

After the purchase, Accor was deemed to be the third largest owner of hotel chain worldwide. But in 2007, Accor sold Red Roof Inn to Westbridge Hospitality Fund LP and Global Special Situations Group for $1.3B.

Westbridge Hospitality Fund then decided to expand the chain year after year. They opened new hotels in different locations including Brazil, Thailand, Japan, and Canada. One of the brand extensions is the Red Roof Plus that was launched in 2014. It is more expensive as compared to the Red Roof Inn. The amenities were improved such as enhanced LED lighting, outside signage, and new room type.

Another midscale hotel under the umbrella of Red Roof Inn was launched in 2018 called the Red Collection. It is in Downtown Chicago and later expanded in the New York City and Illinois. 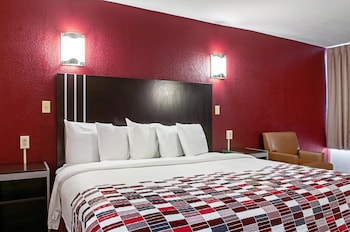 An Outdoor Pool, Free Wi-Fi And In-Room Microwaves And Refrigerators Make The Deluxe Motel A Convenient Place To Relax For The Night Near I-10 And A Wide Variety Of Dining Options. The Two-Story Deluxe Motel Offers 95 Air-Conditioned Rooms With Free Wi-Fi, Cable Tvs, Microwaves And Mini-Fridges. Make A Splash In The Outdoor Pool Or Play Some Pool In The On-Site Lounge, Which Includes A Billiards Table. Copy And Fax Services Are Available In The Business Center. There'S An On-Site Guest Laundry. Pets Are Welcome. Parking Is Free. Non-Smoking Rooms Are Available. The Hotel Is Located On Highway 190 At The Intersection Of I-10, A Half-Hour From Downtown New Orleans, The French Quarter And The Superdome. Catch A Swamp Tour 10 Minutes From The Hotel. Nature Enthusiasts Shouldn'T Miss Bayou Sauvage National Wildlife Refuge, 20 Minutes Away. Nasa'S Stennis Space Center Is 30 Minutes Away. Ochsner Medial Center, Southern Surgical Hospital And Slidel Memorial Hospital Are Five Minutes From The Hotel. The Slidell Amtrak Station Is Two Miles Away, Stennis International Airport Is 19 Miles Away And Louis Armstrong New Orleans International Airport Is 37 Miles From The Hotel.

An Outdoor Pool, Free Wi-Fi And In-Room Microwaves And Refrigerators Make The Deluxe Motel A Convenient Place To Relax For The Night Near I-10 And A Wide Variety Of Dining Options. The Two-Story Delux...

Traveling to Pearl River, Louisiana? Here is your 6-day weather forecast in the area. Whether it is a warm weather destinations or cold climate don’t forget to consider weather, while you pack your bags for this trip. Start your day when the sunrises at 10:58 AM and don’t miss the sunset at 1:00 AM. Today’s winds are traveling east-northeast at a speed of 9 MPH. The temperature feels like 84 with a humidity level of 85. Cloud coverage is 78 percent with 14.7 percent visibility. Today’s UV index is 10 make sure to prepare properly. Make sure to plan your travel itinerary to match your travel weather forecast to make the most of your vacation with Reservations.com.