Economy hotels are aplenty in the hospitality business, but Red Roof Inn stands out from among the many options with its quality accommodations, and its experience in the industry. Red Roof Inn saw its beginning in 1973 in Columbus, Ohio. It was founded by Jim Trueman, but after his demise, his family was unable to run the company and soon saw the hotel purchased by a real estate fund company, the Morgan Stanley.

After the purchase, Accor was deemed to be the third largest owner of hotel chain worldwide. But in 2007, Accor sold Red Roof Inn to Westbridge Hospitality Fund LP and Global Special Situations Group for $1.3B.

Westbridge Hospitality Fund then decided to expand the chain year after year. They opened new hotels in different locations including Brazil, Thailand, Japan, and Canada. One of the brand extensions is the Red Roof Plus that was launched in 2014. It is more expensive as compared to the Red Roof Inn. The amenities were improved such as enhanced LED lighting, outside signage, and new room type.

Another midscale hotel under the umbrella of Red Roof Inn was launched in 2018 called the Red Collection. It is in Downtown Chicago and later expanded in the New York City and Illinois.

Free Wi-Fi And Complimentary Gym Access Are The Prime Perks For Our Guests At The Non-Smoking Red Roof Inn Cleveland Independence, A Pet-Friendly Hotel Near The Interstate And Cleveland Attractions. The Two-Story, 108-Room Red Roof Inn Offers Complimentary Wi-Fi, Flat-Panel Tvs With Cable, Desks And Plush Bedding In Every Room; Select Accommodations Also Have Mini-Fridges, Microwaves And Coffeemakers. Guests Are Entitled To Free Access To A Nearby Fitness Center. Vending Machines, Complimentary Newspapers And Free Parking Are Also Available At The Hotel. Pets Are Permitted. This Red Roof Inn Is Located Near The Junction Of I-77 And I-480 In Independence, Within One Mile Of The Cloverleaf Bowling Center, The Cleveland Clinic And Numerous Shops And Restaurants. The Cleveland Zoo Is 10 Minutes Away, And Downtown Cleveland Landmarks Such As The Rock And Roll Hall Of Fame, Horseshoe Casino, The Cleveland Convention Center And Cleveland Indians Stadium Are 15 Minutes From The Hotel. Cuyahoga Valley National Park And Geauga Lake'S Wildwater Kingdom Water Park Are 25 Minutes Away. Cleveland-Hopkins International Airport Is 12 Miles From The Property.

Offering Free Wi-Fi Access And Pet-Friendly Rooms Close To The Airport, The Red Roof Inn Cleveland Airport-Middleburg Heights Makes It Easy To Visit Cleveland With Family In Tow. The Low-Rise Red Roof Inn Features 117 Non-Smoking Rooms That Include Tvs With Expanded Cable Channels And Free Wi-Fi. Select Rooms Also Have Microwaves And Mini-Fridges. Guests Find Complimentary Coffee And Daily Newspapers. Corporate Guests Have Access To A Business Center And A Meeting Room. Pets Are Welcome To Stay At No Additional Cost, And Parking Is Free. The Red Roof Inn Is Off I-71, About 20 Minutes From Downtown Cleveland And Progressive Field, Home Of The Indians Baseball Team. Baldwin Wallace College Is One-And-A-Half Miles From The Hotel, And Events At The I-X Center Are Three Miles Away. The Southpark Center Mall Features Shops And Restaurants 10 Minutes Away. Cleveland Hopkins International Airport Is Four Miles From The Hotel. 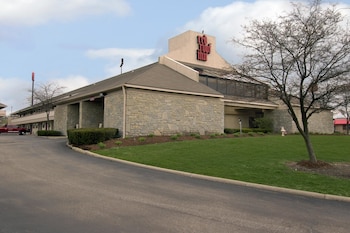 Freebies Include Wi-Fi And Breakfast At The Pet-Friendly Red Roof Inn Cleveland - Medina, In A Convenient Location Right Off The Interstate. This Low-Rise, 120-Room Property Offers Simple Accommodations That Include Complimentary Wi-Fi And Cable On Flat-Panel Tvs. Guests Rise To Greet The Day And Head To The Free Continental Breakfast For A Quick Bite To Eat. A 24-Hour Front Desk Is Convenient For Early Risers Or Late Check-In. One Pet Per Room Is Allowed Without Charge. Parking Is Free. This Red Roof Inn Is Off I-71, Three Miles East Of Downtown Medina And The Medina Toy And Train Museum On The Square. Several Restaurants Are Within A Half-Mile. Ashland University'S Medina Campus Is About One Mile. Go Shopping At The Lodi Outlets, 16 Miles South On I-71. Lake Erie'S Shore And Beaches Are 27 Miles To The North. Downtown Cleveland Is 35 Miles Away. Cleveland Hopkins International Airport Is 21 Miles From The Hotel. 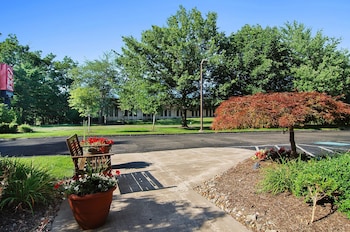 Free Parking And A Convenient Location Three Minutes From The Freeway Score A Hit With Our Guests At The Red Roof Inn Cleveland - Westlake. The Red Roof Inn'S Two Floors House 99 Rooms That All Feature Am/Fm Clock Radios, Coffeemakers, In-Room Safes, Free Local Calls, Premium Cable Tv And Wi-Fi. Bathrooms Boast Granite Countertops. Non-Smoking Rooms Are Available, And Some Rooms Have Microwaves And Mini-Fridges. Head To The Lobby To Snag A Cup Of Free Coffee And Complimentary Newspaper. Exercise Buffs Are Happy To Know The Hotel Provides Free Use Of A Nearby Fitness Center. There'S A Meeting Room On-Site, And Parking Is Free. Located A Block From I-90, The Red Roof Inn Is 14 Miles From Downtown Cleveland And Less Than Two Miles From The Lake Erie Shoreline. Crocker Park Is A Mile Away. Within 20 Minutes, Guests Can Visit The Rock And Roll Hall Of Fame, Progressive Field, The Cleveland Browns Stadium And Quicken Loans Arena. Cedar Point Amusement Park Is An Hour From The Hotel. Cleveland - Hopkins International Airport Is A 13-Mile Drive. 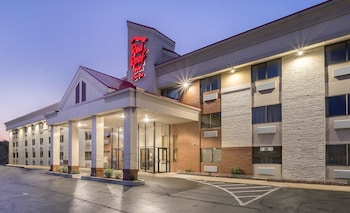 Perks Like An Attractive Indoor Pool And Free Breakfast Please Our Guests At The Pet-Friendly Red Roof Inn & Suites Cleveland - Elyria. The Three-Story Red Roof'S 101 Rooms And Suites Have Bright, Contemporary Decor, Cable Tv And The Convenience Of Wi-Fi Access. Non-Smoking Accommodations Can Be Requested, And One Pet Per Room Is Welcome. After Filling Up On Free Breakfast, Guests Can Relax At The Indoor Heated Pool. The Hotel Also Provides Free Parking, Free Newspapers, Free Coffee And Self-Service Laundry Facilities. The Red Roof Sits Between I-90 And I-80 Within Walking Distance Of Numerous Shops And Eateries At The Westfield Mall. Guests Visiting A Student At Oberlin College Are 20 Minutes From The Campus, While Business Travelers Are 10 Minutes From The Ford Motor Company Assembly Plant And Invacare Corporation. Downtown Cleveland Is About 35 Minutes Away, And Cleveland-Hopkins International Airport Is 18 Miles From The Hotel.

Low Rates, Included Amenities And Nearby Popular Destinations Keep Budget-Conscious Our Guests Worry-Free At The Pet-Friendly Red Roof Inn Akron South. Guests Are Provided With In-Room Desks, Coffeemakers, Cable Tv And Bathrooms With Granite Countertops At The Three-Story Red Roof Inn. Some Of The Red Roof Inn Akron South'S 121 Rooms Also Include Microwaves And Mini-Fridges. Guests Can Take Care Of All Business Tasks On-Site Thanks To Wi-Fi And A Business Center. The Hotel Also Provides Complimentary On-Site Parking And Welcomes Pets (With Restrictions). Red Roof Inn Akron South Is Off I-77 And Surrounded By A Variety Of Popular Restaurants And Shops. Guests At The Hotel Are Within Eight Miles Of Downtown Akron Sites Including The Infocision Stadium And The Akron Symphony Orchestra. Golf Lovers Can Swing 10 Minutes East To Mayfair Country Club Or Three Miles West To Turkeyfoot Golf Course. The Hotel Is Also Located Seven Miles North Of The Harry London Chocolate Factory And Akron-Canton Airport.

Free Wi-Fi And Complimentary Gym Access Are The Prime Perks For Our Guests At The Non-Smoking Red Roof Inn Cleveland Independence, A Pet-Friendly Hotel Near The Interstate And Cleveland Attractions. T...

Freebies Include Wi-Fi And Breakfast At The Pet-Friendly Red Roof Inn Cleveland - Medina, In A Convenient Location Right Off The Interstate. This Low-Rise, 120-Room Property Offers Simple Accommodatio...

Free Parking And A Convenient Location Three Minutes From The Freeway Score A Hit With Our Guests At The Red Roof Inn Cleveland - Westlake. The Red Roof Inn'S Two Floors House 99 Rooms That All Featur...

Traveling to Broadview Heights, Ohio? Here is your 6-day weather forecast in the area. Whether it is a warm weather destinations or cold climate don’t forget to consider weather, while you pack your bags for this trip. Start your day when the sunrises at 9:52 AM and don’t miss the sunset at 1:05 AM. Today’s winds are traveling west-northwest at a speed of 9 MPH. The temperature feels like 70 with a humidity level of 54. Cloud coverage is 10 percent with 15 percent visibility. Today’s UV index is 8 make sure to prepare properly. Make sure to plan your travel itinerary to match your travel weather forecast to make the most of your vacation with Reservations.com.