Find the best deals for Winnipeg Fairfield Inn By Marriott

About Fairfield Inn By Marriott Winnipeg

Owned by Marriott Group of Companies, Fairfield Inn started as a quaint hotel located in the Blue Ridge Mountains of Virginia. Owned and developed by John Willard and Alice Marriott, the first Fairfield Inn hotel used to be Fairfield Farm and offered a stunning eye-candy in the region. Inspired by this beauty, Marriott created and built its first ever Fairfield by Marriott Hotel in 1987 in Atlanta, Georgia.

Originally intended to provide accommodation services for the economy market or below $45 a night and to compete with other leading hotel brands such as Hampton Inn, Red Roof Inn and Days Inn, Marriott launches Fairfield Inn. The brand success triggered a global expansion in 2003 with the brand targeting guests and clients from around the world. By 2017, during the 30th year anniversary of the brand, Marriott opened 900 hotels and expansions in their earlier branches in Asia and South America.

In 2019, Fairfield Inn reached another milestone and opened its 1000th hotel - Fairfield Inn & Suites by Marriott Denver Tech Center North. To commemorate the milestone, guests in the newly opened hotel gets the chance to win a 5-day stay in any Fairfield Inn hotel in the world, with free brownies at check-in, just like how Alice Marriott greeted hotel guests back in the day. 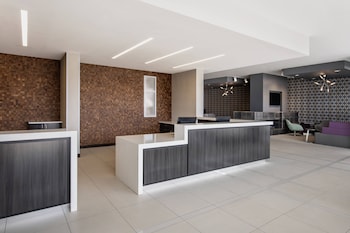 An Indoor Pool With Water Slide And A Hot Tub Plus Freebies Like Breakfast, Wi-Fi And Shuttle Service Make The Non-Smoking Fairfield Inn & Suites By Marriott Winnipeg A Favorite Of Our Guests Visiting The Area. The Six-Story Fairfield Inn Features 126 Rooms Complete With Crisp Linens, Free Wi-Fi, Coffeemakers And Flat-Panel Cable Tvs. The Family-Friendly Indoor Pool Has A Beach-Style Entry, A Waterslide And A Hot Tub, And There'S A Fitness Room On-Site. Freebies Include A Full Breakfast, Airport Shuttle Service, Parking And A Daily Paper, And Pets Are Allowed For An Extra Fee. The Hotel Is Less Than Two Miles From Winnipeg James Armstrong Richardson International Airport. Guests Can Walk To The Nearby Polo Park Shopping Mall Or Drive To The Forks, With Its Shopping, Dining And Public Spaces, Four Miles Away. Downtown Favorites, All Three Miles Away, Include The Manitoba Museum, The Historic Exchange District And The Winnipeg Convention Center.

An Indoor Pool With Water Slide And A Hot Tub Plus Freebies Like Breakfast, Wi-Fi And Shuttle Service Make The Non-Smoking Fairfield Inn & Suites By Marriott Winnipeg A Favorite Of Our Guests Visiting...

If you planning to travel to Winnipeg, Manitoba, Canada, here is your 6-day travel weather forecast to make sure you have all the essentials needed during your stay. Start your day when the sunrises at 2:07 PM. The temperature feels like -31.5 with a humidity level of 70 so dress accordingly. Cloud coverage is 5 percent with visibility at 15 percent. Today’s UV index is 3, don’t forget the sunscreen if you need it! Today’s winds are traveling southeast at a speed of 3 MPH. At the end of the day don’t miss the sunset at 11:16 PM.