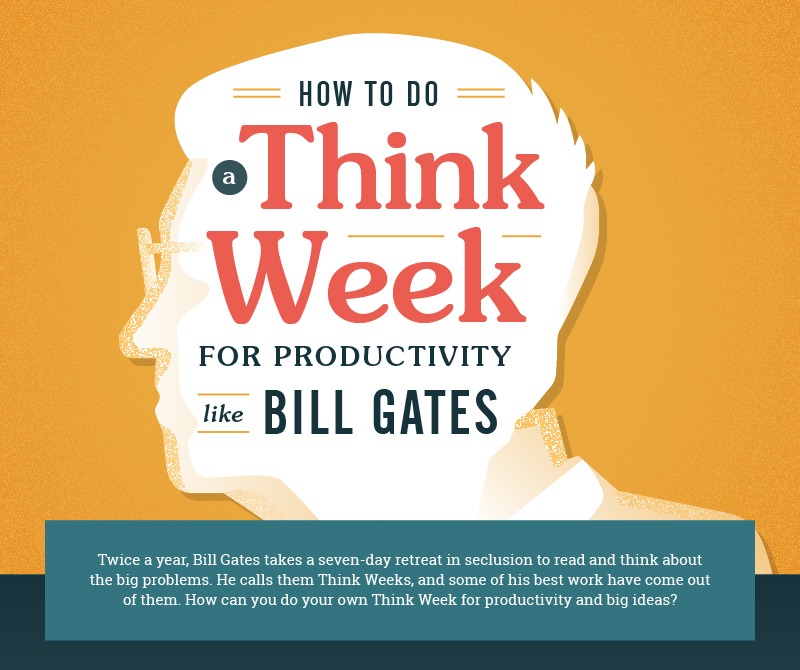 If you haven’t heard of the Think Week that Bill Gates has been preaching about for the past two decades, you may just have to replace your next vacation with this innovative concept.

For those of us working on computers in offices all day, we’re constantly fighting distraction. Between meetings and weekly projects, when do you have a chance to sit down and think deeply about the bigger goals? For Bill Gates and many other that have adopted this practice, the answer is a solo retreat with just you and your thoughts. And it sounds magical.

How Does Bill Gates Do it?

Back in 1995, when the internet era was just dawning, Bill Gates famously sent a memo called “The Internet Tidal Wave” to Microsoft’s executive staff. In it, he accurately predicted that the information superhighway was about to upend the computer industry he helped create and called on his company to adapt to, and dominate, the new landscape. 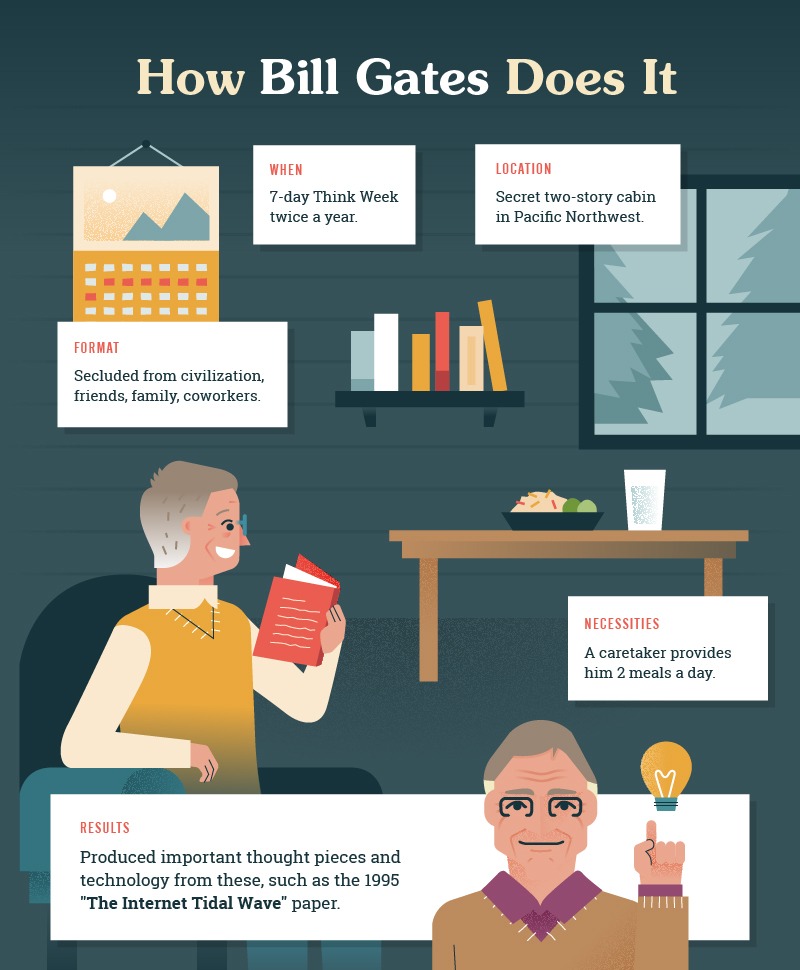 While the memo is prescient, it should be noted that Gates was uncharacteristically behind the visionary curve in the months that preceded it, wrongly assuming the internet was a passing blip on the way to a more elaborate form of digital information exchange. But, as the story goes, he saw the light during one of his legendary “Think Weeks” and veered Microsoft back toward the future.

For decades, Gates has been embarking on biannual seven-day retreats to an isolated two-story cabin in the Pacific Northwest. While there, he disconnects from all technology and cuts himself off from all family, friends and staff, save for a caretaker who provides him two simple daily meals and keeps him stocked with Diet Orange Crush sodas. While in this cocoon of solitude, he reads newspaper articles, books, industry news and Microsoft reports. He also jots down responses to what he’s read and engages in active pondering, letting new ideas flood into the quiet space he’s cleared for them.

His Think Week strategy has worked. In addition to the “Tidal Wave” memo, Gates reportedly came up with the idea for Microsoft’s Tablet PC and other company innovations while taking part in his retreats. While most of us don’t have access to a secret two-story cabin and a private chef, the concept of slowing down, disconnecting and taking time for ourselves is worth exploring, both for our personal and professional well-beings.

What Are the Benefits?

While there hasn’t been much research on Think Weeks, proponents of the practice report a long list of benefits, including increased focus, a boost in creative thinking and a variety of health improvements. 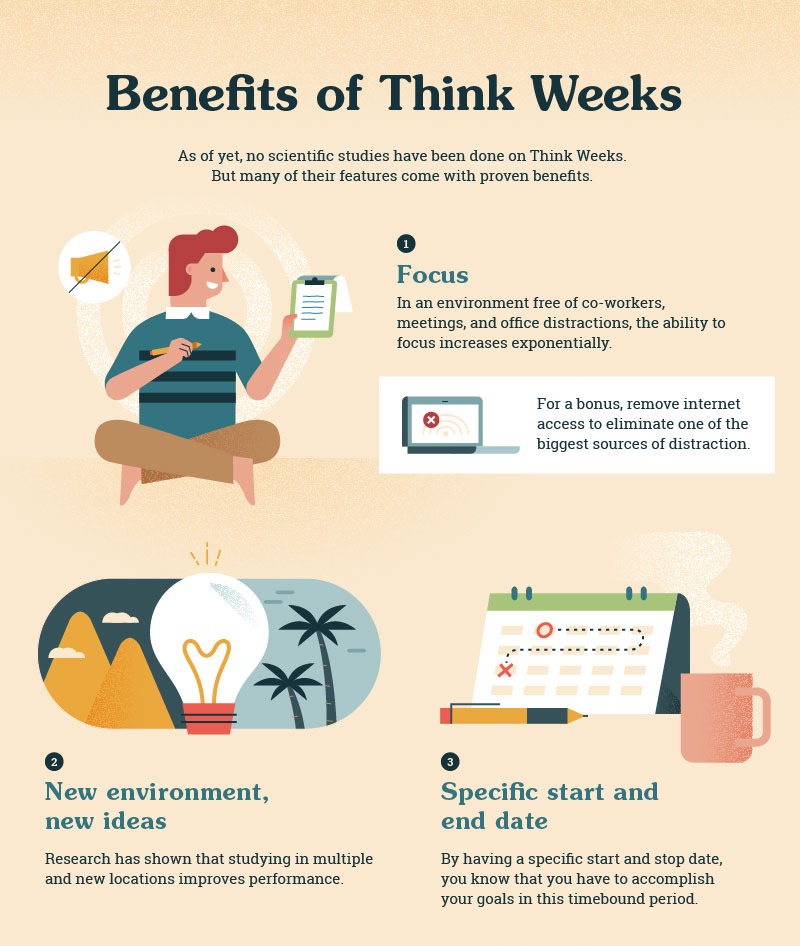 When people disconnect and place themselves in an environment free from the internet, co-workers, meetings and other office distractions, they can clear away mental clutter and truly focus their thoughts. Going to a new location can also increase creativity and inspire new ideas by virtue of being in a different environment with fresh inputs. For example, a classic study found that college students who studied 40 vocabulary words in two different locations retained much more information than students who studied in just one location. Sometimes, a change of scenery can make all the difference. 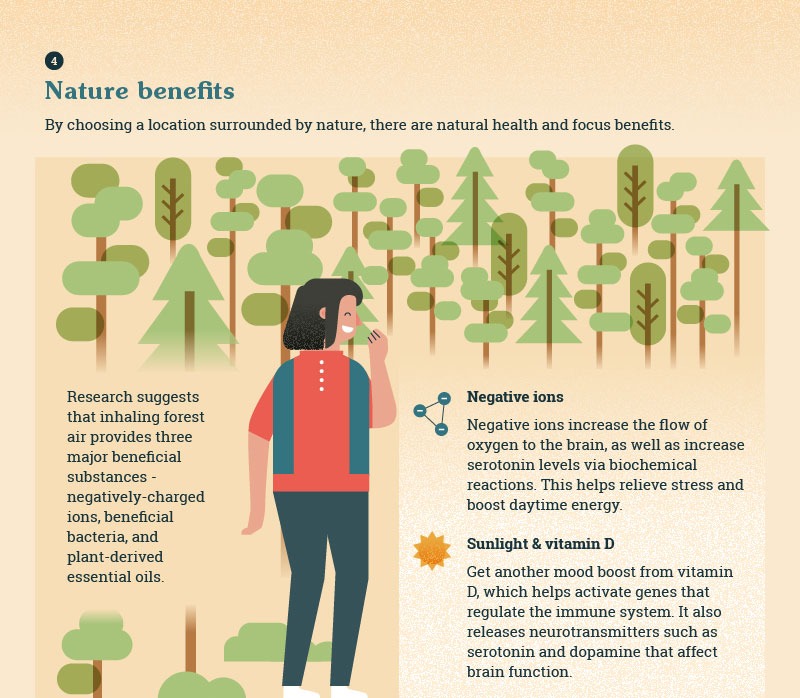 Meanwhile, the seven-day structure of Think Weeks provides a specific start and stop date for the activity, offering motivation to accomplish goals within this time-bound period. However, this shouldn’t be confused with a hard deadline, which studies have shown can cause unnecessary stress and stifle creativity, which is the very antithesis of a Think Week’s purpose. The week-long structure should be used as a framework, not a prison. 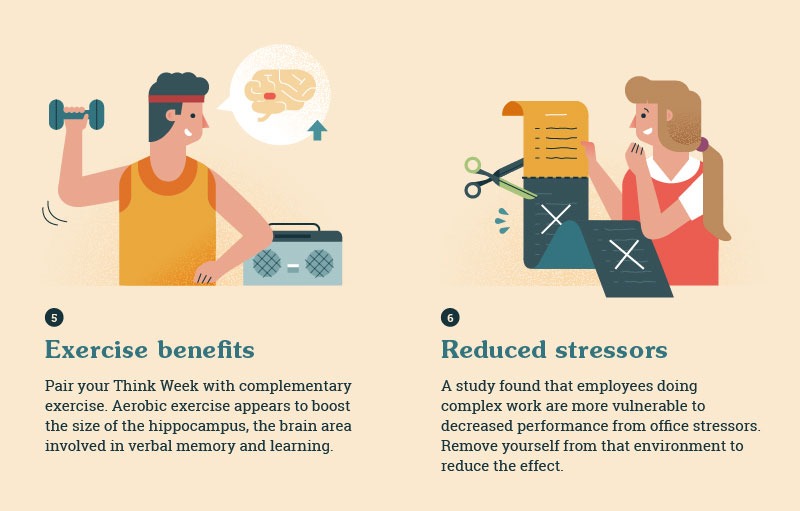 Then there are the health benefits. Quiet locations surrounded by woods and nature allow people to explore the outdoors and breathe in fresh forest air. Studies have found that “tree therapy” exposes you to beneficial bacteria and plant-derived essential oils. It also lets you inhale negatively-charged ions, which are believed to help boost serotonin, alleviate depression, reduce stress and increase daytime energy levels. 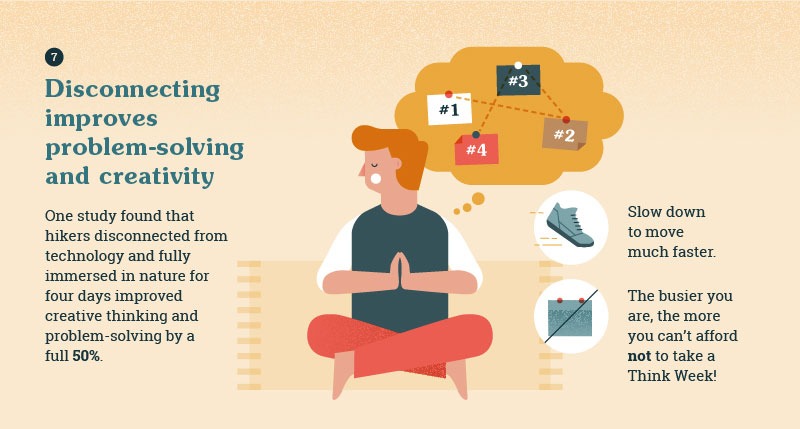 Walking in nature also lets you bask in sunlight and soak in vitamin D, which is a major immune system and mood enhancer, and get aerobic exercise, which can stimulate verbal memory and learning. In this natural environment, unplugged and relaxed, you can set your brain free and see things from 50,000 feet, giving your thoughts the space they need to reset, refocus and re-evaluate your goals and aspirations.

How to Do Your Own Think Week

Think Weeks can be approached in many ways, from one-day sojourns on a local hiking trail to seven-day excursions on a remote island. However, there are some basic rules you should follow to get the most benefits out of the experience. 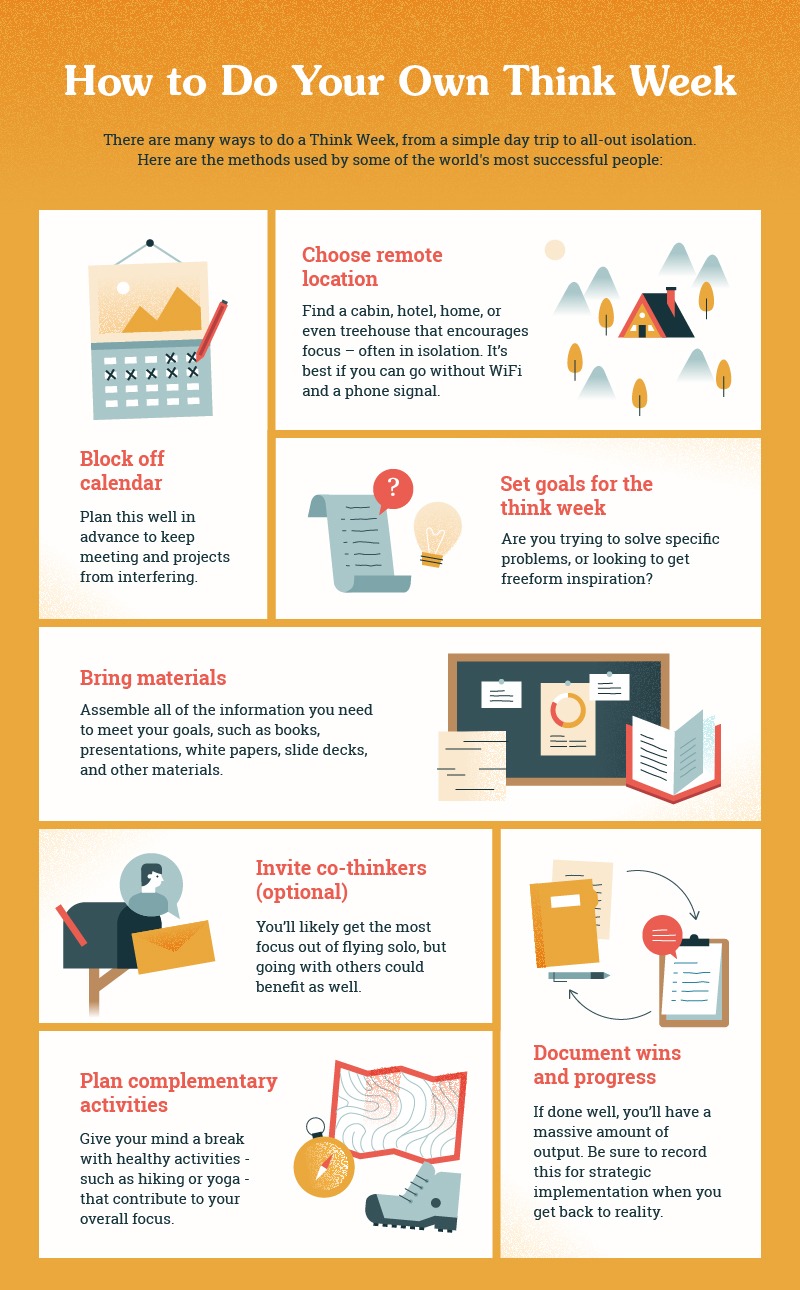 Advocates of Think Weeks say that you should block off time for the event well in advance to ensure that meetings and deadlines are kept at bay. It’s also important to choose somewhere off the beaten path. Find a hotel, cabin, house, Airbnb, tent or even a tree house that’s fairly isolated and, ideally, close to nature. In addition, you should set goals for your time off the grid. Understanding what you’re trying to accomplish, be it solving specific problems or exploring freeform ideas, will help you take advantage of your enhanced focus. You will also want to pack some materials, such as inspirational books, white papers, slide decks, notebooks and pens, to encourage the flow of ideas.

Once at your location, embrace your new environment and try to commit to staying away from your cell phone, emails and the internet. These things not only distract you, but a 2005 Hewlett Packard study found that persistent email interruptions can drop your IQ by 10 points. Also, don’t forget to leave time for outdoor activities like hiking and meditation. A 2012 study found that people who disconnected and hiked for three or four days experienced a 50% increase in problem-solving.

Think Weeks may not be for everyone, but if you can afford the time off work and away from family, they can be a game-changer for your productivity and career focus. Plan your think week getaway with Reservations.com.

Think Weeks are not fully a relaxing break like a honeymoon to the Bahamas, but you should come away feeling refreshed, recharged, and ready to launch your billion-dollar idea.