What is it that makes cultures distinct from one another?

Sometimes when traveling abroad, the biggest, most obvious differences between peoples and places can fade into the backdrop of the experience. Nature, geography, architecture, cuisine, language, dress, appearance — while these differences are some of the most immediately recognizable, they can’t seem to account for “foreignness” in and of themselves.

The most exciting realizations abroad are often those that open our eyes to our own seldom-questioned assumptions about how the world is. Culture is filled with unwritten rules that govern how we interact with others, what we value, what we celebrate, what we revile, what we will and will not tolerate. These cultural forces are so striking precisely because everyone, save for outsiders, seems to be in on them without necessarily having to discuss them openly. 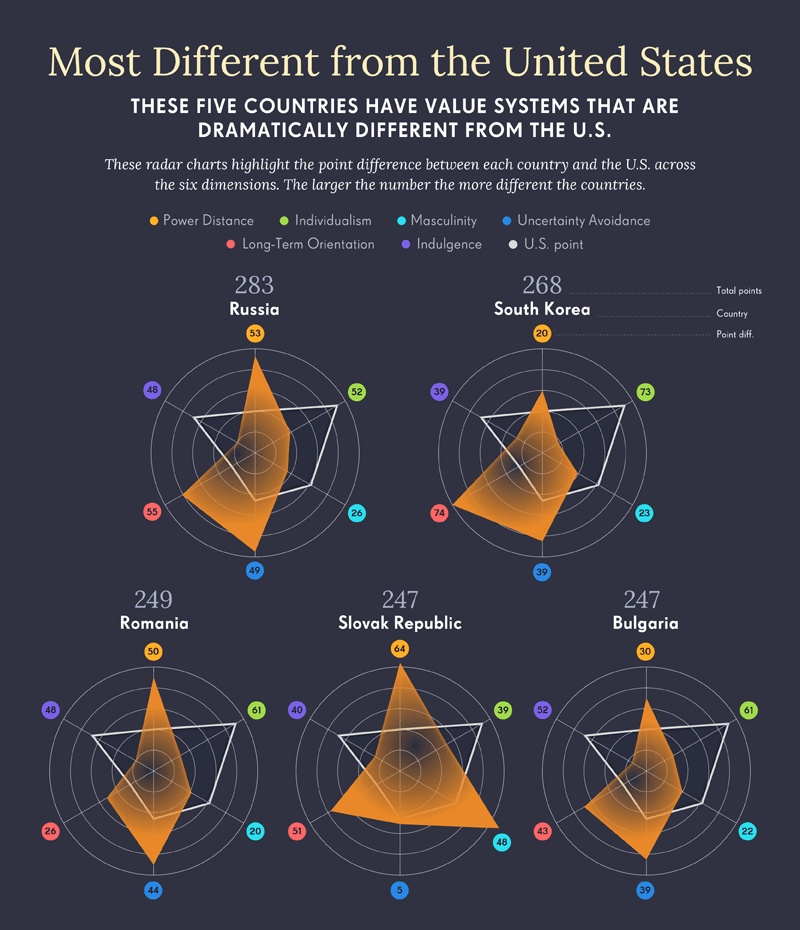 Identifying, quantifying, and understanding these invisible cultural forces constitutes the lifework of Dutch social psychologist Geert Hofstede. Fascinated by the consequences of cultural differences for international communication and management, Hofstede developed a six-dimensional framework for discerning the phenomenon of cultural difference.

While employed at IBM during the 60s and 70s, Hofstede poured over the results of a company survey interviewing employees all over the world about their values. Out of these initial surveys, Hofstede identified four spectrums along which the differing values seemed to fall:

Through independent research over the coming decades, Hofstede revised his theories to include two additional dimensions of cultural values:

Today, Hofstede’s methodology and the six dimensions of cultural values that he identified continue to be a hallmark for research in academic disciplines ranging from communication to anthropology. His framework finds numerous practical applications in fields like international business negotiations, global marketing, software companies, and non-profit management.

The 6 Dimensions of a Nation and its People

Given the endless diversity of world cultures, scientifically quantifying cultural difference may seem like a moot cause muddled by far too many uncontrolled variables. Hofstede, however, identified six issues where distinct preferences for one state of affairs over another were traceable along national lines. 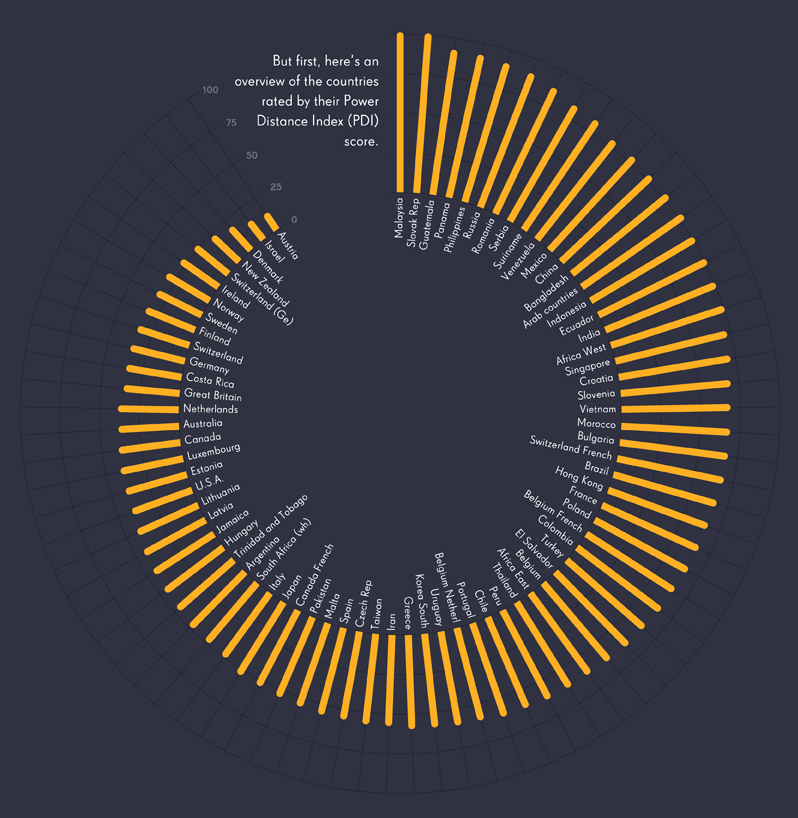 Hofstede is quick to point out that the six dimensions of culture he identifies are generalizations. As theoretical constructions, they are meant to be used simply as guidelines for understanding and winning insights into national cultures. They are in no way meant to be taken as hard-and-fast rules that can deterministically explain individual personalities, organizational cultures, or diverse communities within a single nation.

Power distance describes the degree to which members of society expect and accept an uneven distribution of authority, resources, and privileges. The threads of this dimension of culture run through social insitutions and organizations such as schools, political bodies, the family, and the workplace.

Countries with high PDI scores are generally those with stark hierarchies, where the less powerful are taught to “know their place” and respect authority. High PDI scores correlate with deferential relationships between students and teachers, children and parents, wives and husbands, employees and employers, subjects and rulers.

Low PDI scores, on the other hand, do not mean that social and financial capital is completely and evenly distributed. They instead correlate with a lack of observance of differences in rank and status. People from countries with low PDI scores are less likely to drastically change their manner of speaking depending on the status of the person they are addressing.

Countries with the highest PDI scores*

Countries with the lowest PDI scores

Hofstede’s second cultural dimension, individualism, describes the degree to which members of a society feel beholden either to the interests of the community at large or to their own personal interests.

In countries with high IDV scores, people generally show a preference for smaller, more loosely-knit social frameworks and are reluctant to extend their conception of their own personal responsibility beyond the bounds of immediate family. In highly individualistic societies, people act primarily in service of their own interests, opinions, and well-being. They may glean very little satisfaction from the accomplishments of others as opposed to their own individual accomplishments.

Countries with low IDV scores can be described as collectivistic. Members of these societies are more likely to feel loyalty to and personal responsibility for the well-being of their community at large. In highly collectivistic societies, people act primarily in service of a wider group dynamic and are willing to suppress their own opinions or interests in order to preserve harmony. They feel a sense of pride in the accomplishments of others from within their community, and see their own accomplishments as reflecting back on their community.

Countries with the highest IDV scores

Countries with the lowest IDV scores

The third dimension of Hofstede’s model describes the extent to which societies prize traditionally masculine traits such as toughness and assertiveness in public life.

Countries with high MAS scores are those in which the domineering, the high-achieving, and the heroic are rewarded with material riches and public recognition. Regardless of their gender, people in these countries are taught from a young age that life consists of a never-ending series of competitions and that the journey to the top is cut-throat.

Countries with low MAS scores can be described as valuing traditionally feminine traits, such as modesty, empathy, and agreeableness, over more masculine ones. Within these societies, public discourse is defined by collaboration, consensus, and a concern for improving the quality of life for all. The idea of caring for the weak is more likely to resonate with and motivate members of feminine societies than would the idea of defeating opponents.

Countries with the highest MAS scores

Countries with the lowest MAS scores

The fourth element of national culture identified by Hofstede is uncertainty avoidance. UAI describes the extent to which members of a society see issues in rigid, black-and-white terms and thus the degree to which they are disturbed by change and uncertainty.

In countries with high uncertainty avoidance scores, people generally place a great deal of importance on long-held social conventions. They see adherence to these conventions as an indicator of overall safety and prosperity. When challenges to these structures arise, members of high UAI countries may be inclined to respond with either aggressive controls or despair. Within these countries, unorthodoxy is generally regarded as a slippery slope and ambiguity is to be avoided at all costs.

In countries with low UAI scores, people are inclined to take a relaxed, more nuanced view of ambiguity and change. They see transformation and uncertainty as unavoidable parts of life, and have respect for those who can adapt and innovate as the moment demands. Members of societies with low UAI scores have flexible morals and are quick to toss conventions or principles overboard if they feel they have progressed beyond them.

Countries with the highest UAI scores

Countries with the lowest UAI scores

Hofstede’s fifth cultural index, long-term orientation, describes the extent to which members of a society perceive a consistent, interconnected thread running through the past, present, and future.

In countries with high LTO scores, people are inclined to act pragmatically in the present in order to prepare for the future. They are acutely aware of how events in the past, even those that predate their own birth, contributed to current circumstances and are therefore likely to display humbleness and frugality in times of plenty, and flexibility and resourcefulness in hard times. Long-term oriented cultures prize education, thrift, and good planning and are willing to delay gratification in the name of a more secure tomorrow.

In more short-term oriented countries, people generally view the horizon of impactful events in a limited way. They do not necessarily perceive a connection between events of the past and the circumstances of the present, and may be especially reluctant to see events that predated their birth as having any influence on their lives. People from countries with low LTO scores may be inclined to lavishness in times of plenty, and may cite “acts of God” when faced with crises. Short-term oriented cultures prize instant results and immediate gratification and are averse to making sacrifices in the here-and-now for the promise of a future payoff.

Countries with the highest LTO scores

Countries with the lowest LTO scores

6. Indulgence (IVR) vs. Self Restraint

The final index in Hofstede’s six-dimensional model of national culture describes a society’s relationship to pleasure and self-discipline and the abandon with which members of a society express themselves.

Countries with high indulgence scores are those in which social structures are built to acknowledge human desires and encourage people to pursue their fulfillment. People from indulgent countries are likely to place value on freedom of speech, to emote freely, and to actively solicit feedback from those around them. Within high IVR countries, people may be inclined to see leisure as a virtue and pleasure as theirs for the taking. They may tend to think less of those they perceive to be humorless, unhappy, or generally dissatisfied with the state of their lives.

In countries with low IVR scores, social structures are generally built in a way that suppresses emotion and desires and equates duty with destiny. Restrained cultures are those that regulate behavior via strict social norms and prioritize the fulfillment of one’s obligations as the fulfillment of one’s life purpose. People from countries with low IVR scores may be reluctant to offer their opinion and may feel guilt or shame for engaging in frivolous activities. They may regard those who emote freely or openly indulge in such pleasures as foolish, wanton, or unprofessional.

Countries with the highest IVR scores

Countries with the lowest IVR scores

Infographic: A World of Difference