The gym is more crowded than usual. Maybe your work colleague is on a no-sugar detox (something we probably all need after the holiday season). And believe it or not, one of your friends probably won’t meet up for a happy hour because she’s doing the infamous dry January.

So, the inevitable question: Did YOU make any new year’s resolutions for 2020?

Are you checking off those new goals and championing your new habits?

Or better yet, and more likely, did you already give in and give up? 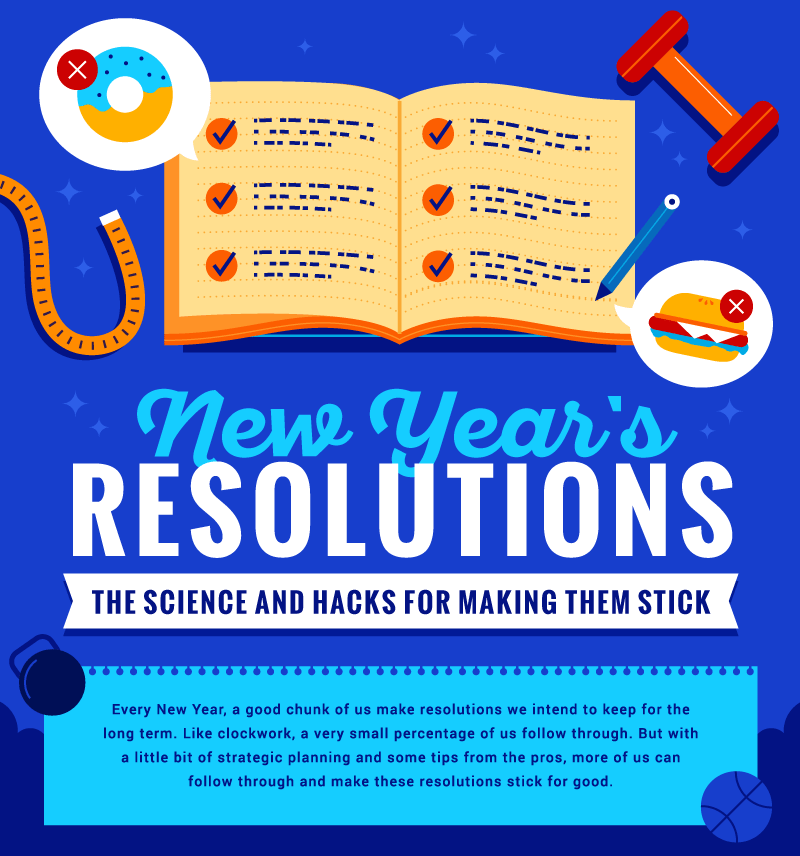 Whether you’re a fan of them or not, our society has decided that making these promises to ourselves every year is a good idea. And it certainly isn’t a bad one. We all have room to make positive changes in our lives, so why not jump on the bandwagon and join in?

Since it’s still the beginning of the year, we have good news for you. You still have time to keep your resolutions going strong!

The science tells us we need more than one month to make real changes anyway. That means there’s still time to resolve to do something new for this newest decade. 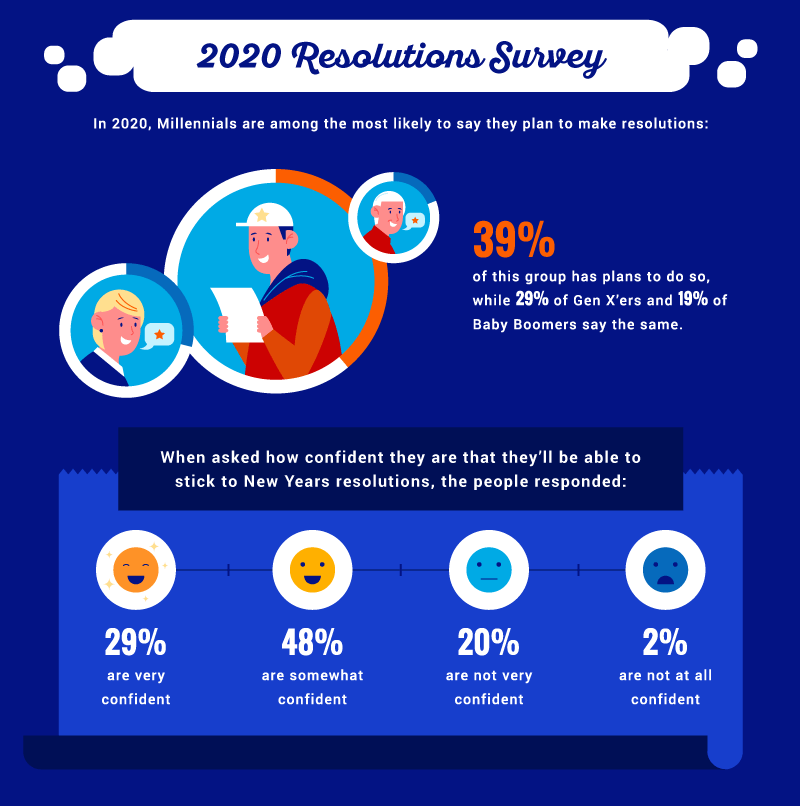 A YouGov poll of 1,174 people in the U.S. asked a variety of questions on New Year’s resolutions. Whether or not you’re on board, here’s who is:

Overall, less than 50% of us are making resolutions in the first place. The downward trajectory from younger generations to older as shown in the survey reflects a natural transition. Often younger people are working on establishing new habits for positive changes like saving money or developing new skills.

The poll also asked those who have made resolutions how confident they are that they will be able to stick to their New Years resolutions:

Going into a resolution without confidence can be a sign that you aren’t committed or don’t know how to commit. Maintaining motivation is not easy. So work on clearly defining your resolution, knowing why you are making it, and building strategies for success that will help you achieve your end goal. Not knowing how to do these things can be a real determining factor in whether you succeed or not.

Funnily enough, committing to making a resolution might only be successful if you know how. 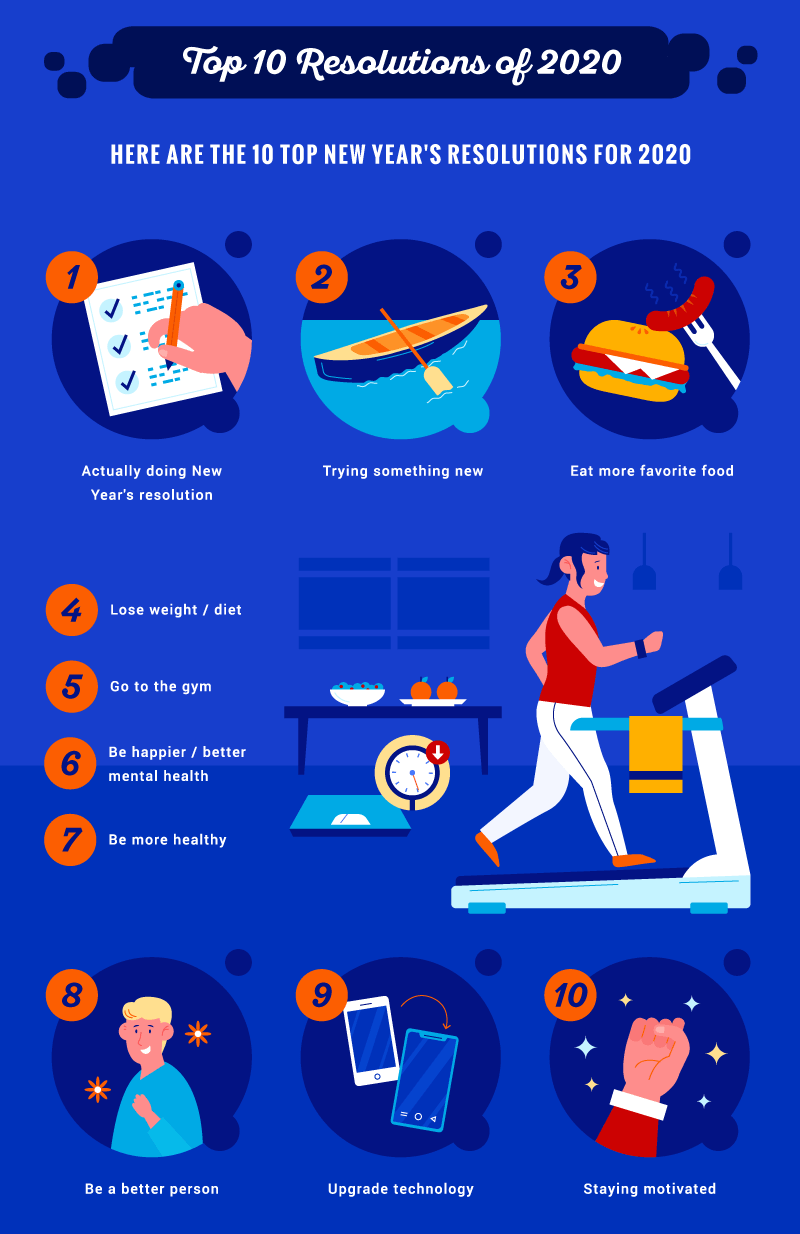 The usual promises around physical health, of course, make an appearance, but more people are working to improve their general wellness. Mental and emotional health is getting a lot more attention than ever before. Resolutions like “be happier,” “eat more favorite foods,” and “be a better person” all feature within the top 10.

Why do we Make Resolutions? A History.

While it may seem like a rather modern idea, resolutions have been around for a long time, as long as 4,000 years ago!

Starting with the Babylonians in 2000 BC, the new harvest marked the new year. They celebrated with a 12-day celebration (does that have any connection to the 12 days of Christmas?), but instead of happening in January it was closer to March.

The religious festival went by the name Akitu, meaning barley, to mark the planting season of the new crop. The semblance to resolutions is found in the promises they dedicated to their gods to pay back their debts or return borrowed objects. If the promises were fulfilled, the gods would bestow favor on them in the new year

Today’s January 1st still marks the new year and it’s all thanks to Julius Caesar. With his Julian Calendar, he aligned the calendar to the sun and seasons (instead of the moon). To do this, he added 67 days to 46 B.C., and, so, January 1, 45 B.C. marks the beginning of this new tradition.

According to the Roman tradition, the month of January was named for and so dedicated to the god Janus. A god of beginnings and passages, of future and past, Janus was a two-faced spirit who inhabited doors and arches. He represents change and time, which is exactly what resolutions are about. So, Romans would offer sacrifices to Janus and make promises of good conduct, their own version of resolutions. Neighbors would exchange good wishes, offer figs and honey in hopes of gaining his favor in the coming year.

More recently, modern Christians began using the new year as a time to reflect on past mistakes and be better in the future.

The English clergyman John Wesley, who founded Methodism, established the Covenant Renewal Service in 1740. Commonly held on New Year’s Eve or Day, it was a day dedicated to Scriptures and hymn singing. It was a Christian spiritual alternative to the usual raucous celebrations for bringing in the new year.

This late-night gathering is also known as watchnight service or even Watchnight Mass. Today these events are often held in protestant churches to mark a moment dedicated to praying, confessions, and making resolutions for the new year.

While rooted in religious traditions, today’s version of resolutions is much more about personal, individual growth. It is a secular tradition practiced by all, whether religious or not. So everyone is welcome to participate and make-up their own resolution!

The Science and Stats of Resolutions 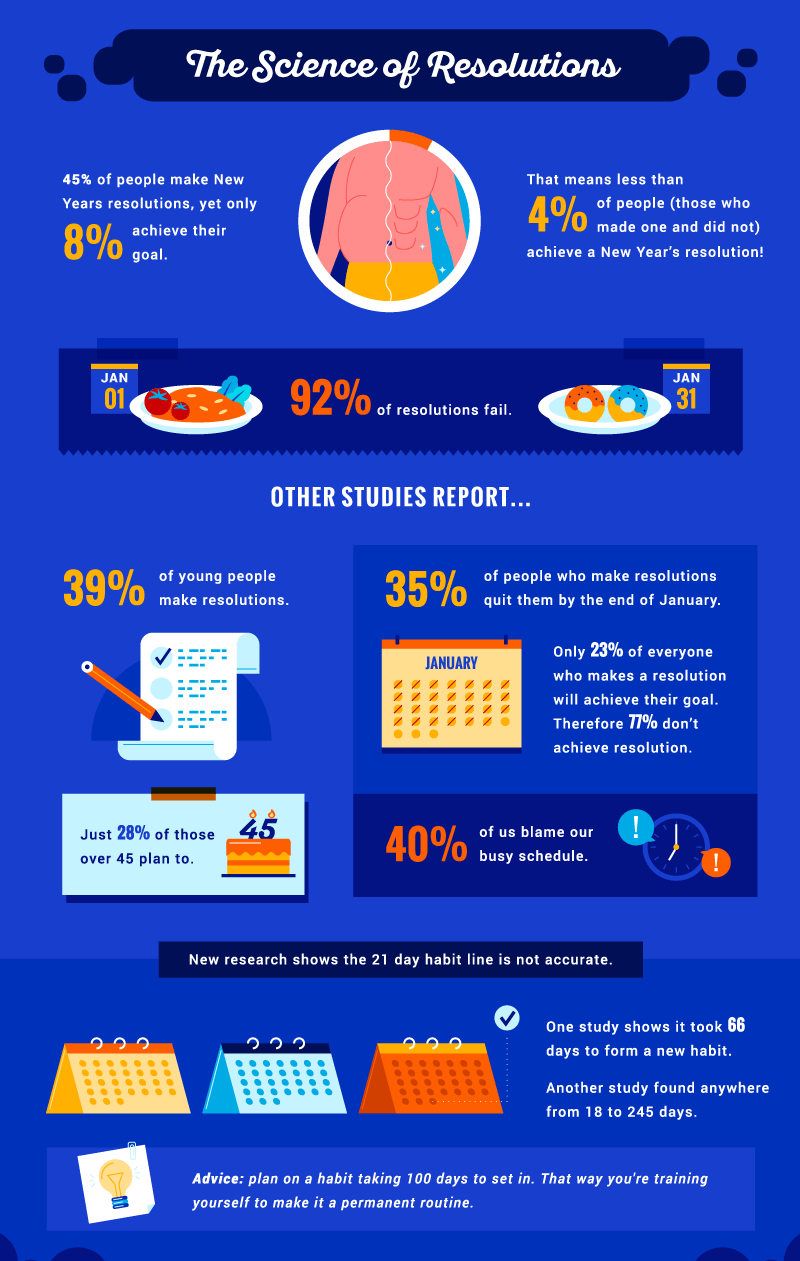 According to one study, 45% of people make New Year’s resolutions, yet only 8% achieve their goal. That’s a shockingly low success rate.

That means less than 4% of people (those who made one and did not) achieve a New Year’s resolution!

So, we know that 92% of us will fail to make or achieve a resolution. That’s the bad news. But as with any goal in life, only a certain percentage of people will achieve the end result. That doesn’t mean it’s not worth trying, as every attempt helps us get better. We have some hacks to make those numbers just a little bit higher in the next section.

Does age impact our desire to set resolutions? It seems that way, as 59% of young people make resolutions, while just 28% of those over 45 plan to. We’ll hazard a guess that either younger people are more motivated to make bigger changes in their life, or a larger portion of adults over 45 have more of their bad habits worked out, and don’t need the resolutions as much.

Different studies show conflicting information, so we have to keep these different sources in mind. Franklin Covey found that only 23% of everyone who makes a resolution will achieve their goal. Therefore 77% don’t achieve resolution. This is a higher percentage than the other study, but still shows the huge gap in achievement.

And while 40% of us blame our busy schedule, perhaps our expectations timeline is just unrealistic.

Despite the often-repeated stat, new research shows the 21-day (or 28-day) habit line is not a hard and fast rule. In fact, one study by the University College London psychologist Phillippa Lally shows it took 66 days on average to form a new habit. But that same study found it took anywhere from 18 to 245 days, depending on the person and the goal.

Our advice: plan on expecting a habit to take longer, to set expectations properly. Commit to a resolution and understand that it can take half a year or more to set in. At the very least, set a 100-day habit expectation before automaticity sets in.

Tips to Hack your Resolutions to Make them Stick

We know that the data shows that 35% of people who make resolutions quit them by the end of January. So what are the top hacks to make those resolutions stick around a little bit longer?

1. Set a limited amount of resolutions

Studies show that a limited amount of resolutions, even just one, helps us focus on the end goal. So rather than dreaming up ten different resolutions and splitting your attention among all of them, choose just one or two really meaningful goals.

By making the resolution very specific, you’re helping create a vision for your mind to hook on to, as well as creating a measurable goal. So rather than thinking about “losing weight” you should choose a goal such as “I want to lose 2 lbs a month by July 1”.

Your resolution should be challenging yet manageable. You want to push yourself, but don’t want to fail with an impossible goal. If the resolution is too ambitious it can deplete a person’s confidence. Therefore, it’s much better to set small achievable goals and build progress.

This brings us back to business classes. Think about the S.M.A.R.T. goal system.

How will you know if you’re actually starting to achieve the resolution? You should track the small victories along the way! The act of recording the goal itself can contribute to progress.

5. Make the goal obvious with a vision board

A vision board can by a physical or digital reminder of your goals. Create the board and place it in an obvious location, such as the kitchen, bathroom, or office. Not only will the visual itself help engrain the resolution in your brain, but the repetitive exposure will remind you of the goal daily.

6. Build in a social support system

Studies show that a social support system is critical for boosting success rates in achieving your resolution. It’s especially important for those trying to quit a habit, such as smoking.

The system can be an offline system with friends and family, as we’ve done since ancient times. Or, if you want to be a digital hipster, you can also announce on social media, a new trend for the 21st century.

As one example in practice, if you’re trying to quit smoking, call a friend when you want the cigarette. You’re directly replacing a bad habit with a good one.

7. Should thoughtfully plan and be 100% committed

A resolution chosen in the midst of holiday overindulging? Terrible idea. Make your resolution thoughtful and meaningful. And if you’ve already chosen one, revise it slightly to make it more impactful and permanent.

8. Ok to take a limited number of off days

We can sometimes be harder on ourselves than needed, as studies show that taking one day off doesn’t hurt overall success.

So you should definitely take it one day at a time instead of giving up. Missed a day? No worries, hope right back on it.

Think about how you can engineer success. Instead of taking a massive amount of energy to move towards your resolution, instead, incorporate small steps to make effortless progress.

You can do this by streamlining decision making and reducing the number of decisions, no matter how small.

And if you do need to make more difficult decisions, make them earlier in day before willpower is depleted.

Setting resolutions and making them a permanent part of your life, or even just for a year, is very difficult, with the majority of us failing to accomplish our goals. But by understanding the science of resolutions and human willpower, and applying some of these helpful hacks, we’ll be in a much better place by this time next year.