Only one in three Americans (32.5%) disagree with the government using facial recognition technology at airports to improve security and boarding speed, according to a new survey from travel search engine Reservations.com.

Conversely, 42.6% of those surveyed approve of the use of facial recognition technology to improve security and boarding speed.

One-quarter of Americans (24.8%) neither agree nor disagree. 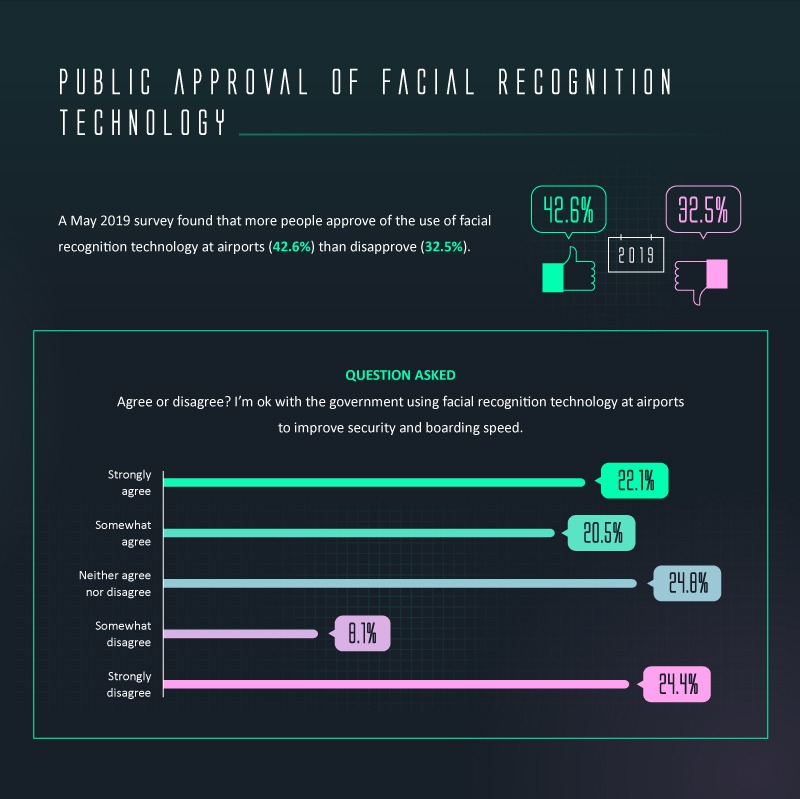 Agree or disagree? I’m ok with the government using facial recognition technology at airports to improve security and boarding speed.

How Facial Recognition Technology Works at the Airport

Facial recognition technology at airports works in conjunction with law enforcement and government databases to recognize the passenger. In the United States, the U.S. Customs and Border Protection (CBP) maintains the database. The matching is instantaneous and is 99% accurate.

According to the The Wall Street Journal, “U.S. Customs and Border Protection is using facial recognition to fulfill a congressional mandate calling for a biometric entry and exit system for international visitors”. This comes from a congressional mandate on biometric entry and exit for international travel. The CBP was given responsibility for carrying out this mandate and trialing the technology at airports across the Untied States. 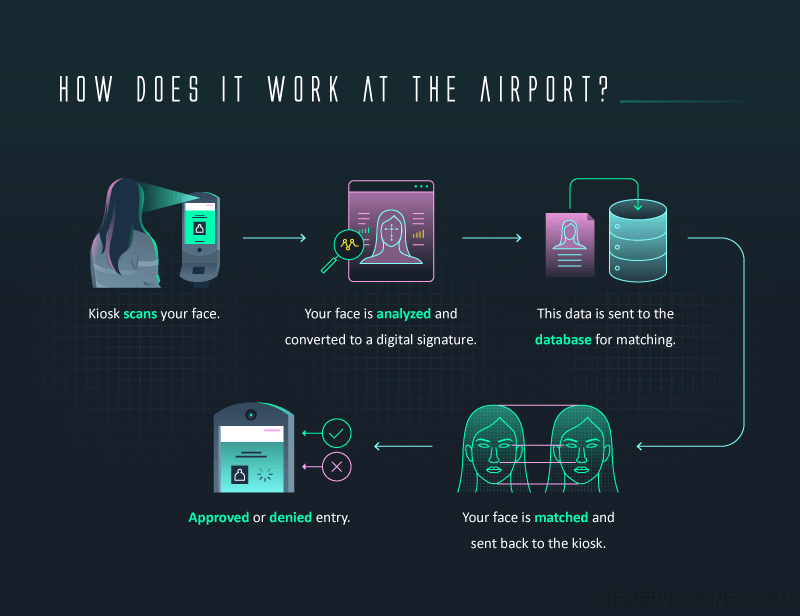 How is your Face Recognized?

The facial recognition system uses approximately 80 distinct markers to recognize your individual face. This technology analyzes facial curves on a micro scale and then translates those characteristics into a unique signature which is then matched to the database of facial signatures. In the United States, the CBP matches against passport photos for both international visitors and U.S. citizens. 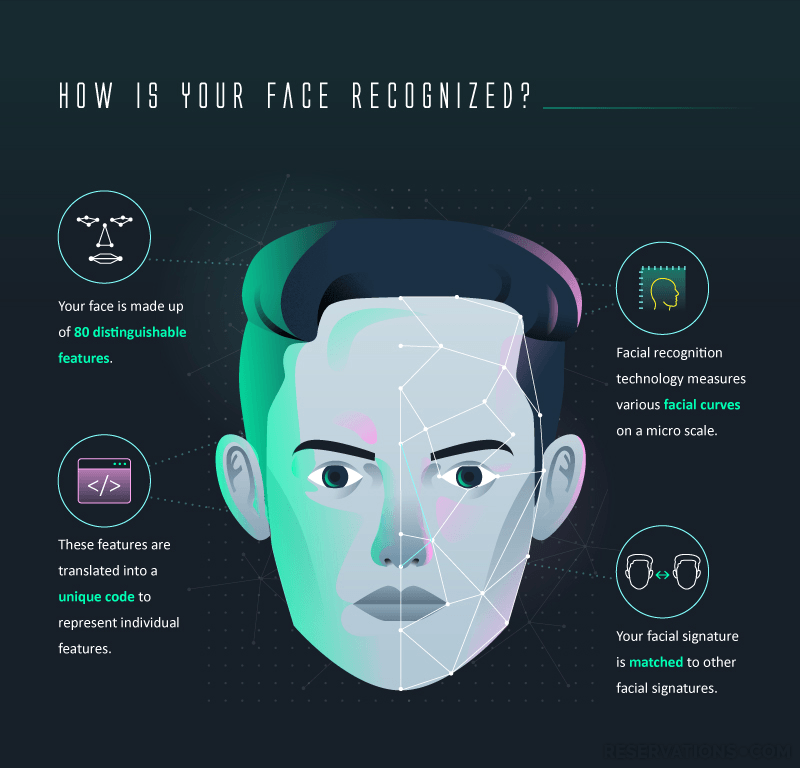 Citizens are mixed on their opinions of facial recognition technology, as shown in our survey. There are many pros and cons for governments to work out in the coming years. With a plan to roll out this technology at 97% of airports by 2023, this will quickly become a new normal.

The best arguments for facial recognition technology point to the convenience and improved security. Faster boarding and shorter security lines is something we can all get behind, but the tradeoffs of privacy have to be considered. Security improvements are welcomed, especially in the anxiety of post-9/11 airport screening procedures, but there are problems with identifying minority groups. Stats show up to 35% errors for darker skinned women, compared to 1% errors for white males.

Trusting governments and 3rd party data providers for managing and matching facial signatures is also a concern. Hacking and data breaches are a real possibility. Citizens can opt-out but the addition steps to do so mean that most won’t. 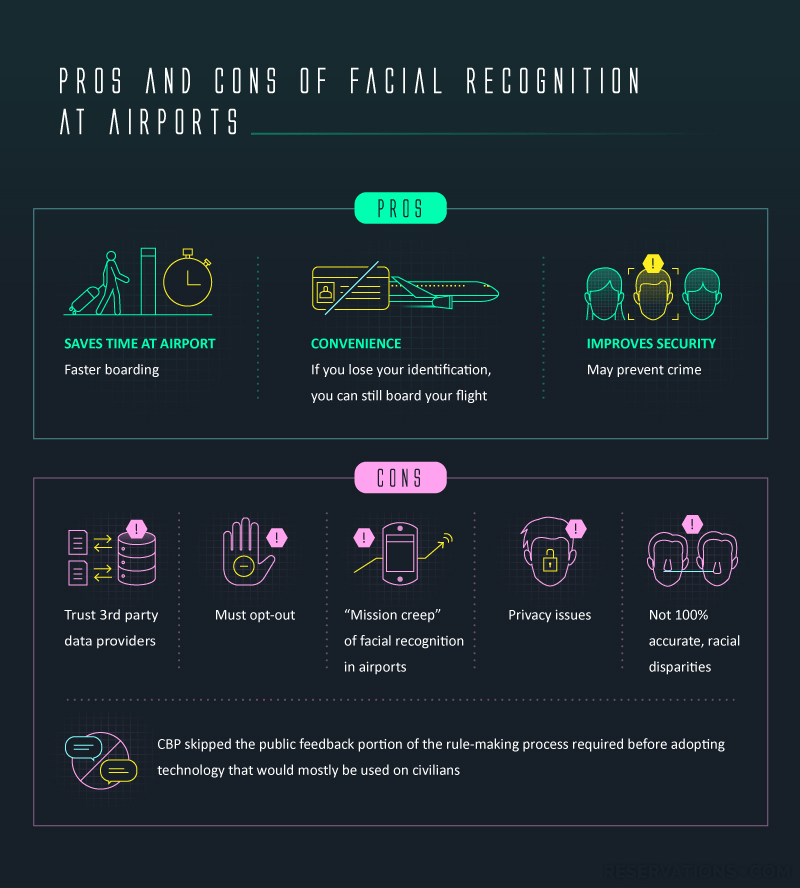 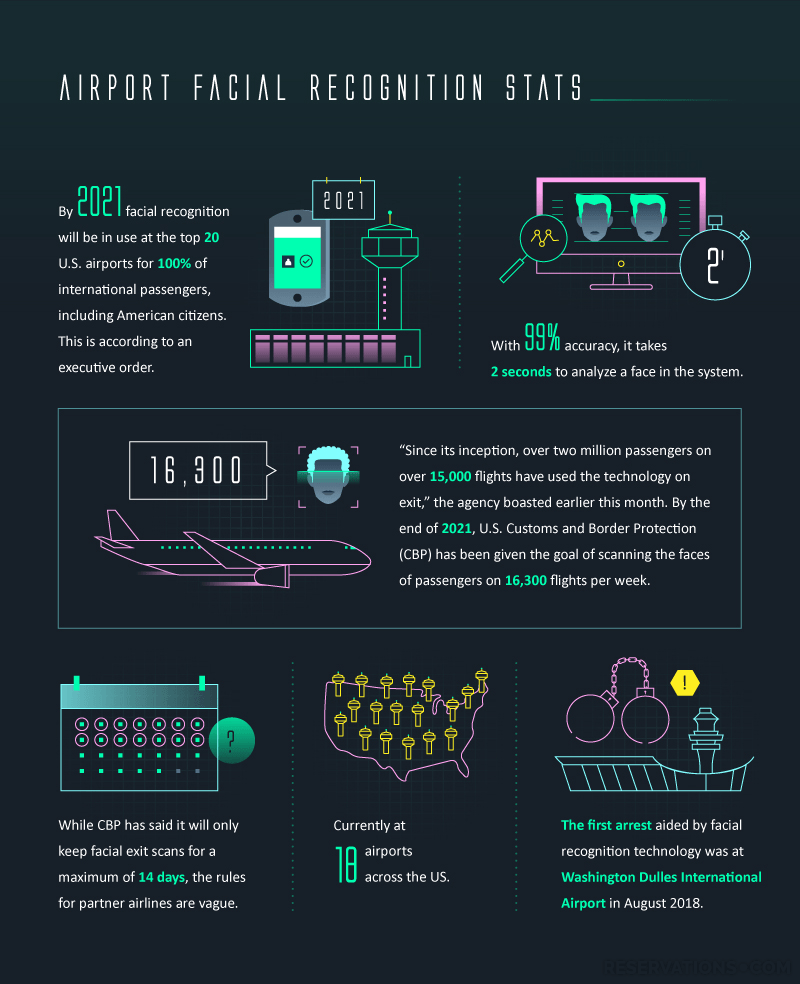 This online survey polled 1,001 adult internet users in the United States from May 21 to 24, 2019 via the Google Surveys platform. Responses were weighted using gender, age, and region to match the demographics of the national internet population as estimated by the U.S. Census Bureau’s Current Population Survey.

A December 2018 survey by Center for Data Innovation found the following:

Agree or disagree? The government should strictly limit the use of facial recognition technology even if it means airports can’t use it to speed up security lines.

An October 2018 survey by Brookings reported as following:

How favorable are you to using facial recognition software at airports to establish your identity?